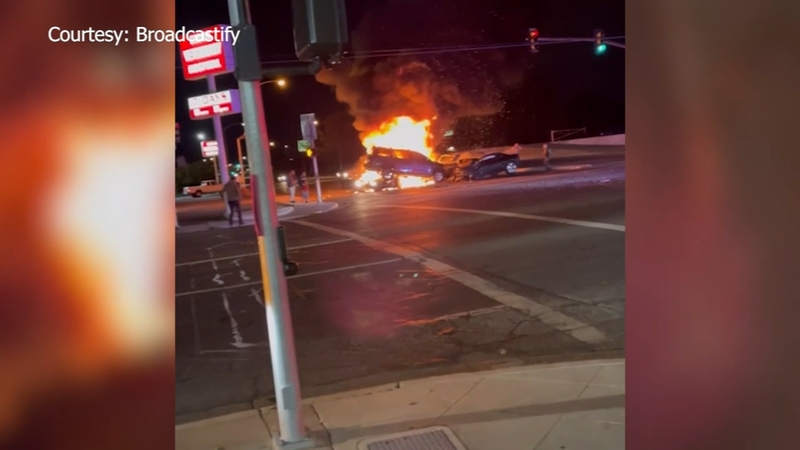 Authorities say this is the devastating aftermath of a reckless driver who was trying to escape a Fresno County Sheriff's Deputy.

Detectives with the Fresno Police Department say the deputy attempted to pull-over 20-year-old Francisco Portillo after he witnessed him driving erratically in his Camaro.

"The vehicle continued and failed to yield to the deputy and at one point, ran a red light at McKinley and First Street," says Fresno Police Lt. Israel Reyes.

The pursuit only lasted a few seconds before the deputy called off the chase for safety reasons.

But Portillo kept going -- hitting speeds of over 100 miles per hour.

It all came to an end at Cedar and McKinley, where Portillo slammed into seven vehicles resulting in a deadly pileup.

"After the first impacts, a lot of the vehicles caught on fire," Reyes said.

Several explosions and the moment Portillo was pulled from his burning Camero were captured by a viewer.

Charmpal Gill was at a loss for words as he watched from a distance.

"At the time I was very, very scared," he said. "I just thought about the people who were inside."

Gill rushed inside a gas station, grabbed a fire extinguisher and ran towards the accident.

As he approached, he was shocked by what he saw

"I just froze at that time," he said. "I saw two or three cars that were completely smashed up and lit up in flames."

Detectives say a man in one vehicle died, along with two women in another car.

Portillo and his girlfriend, who was in the passenger seat and one other victim were taken to the hospital with critical injuries.

Portillo could face at least three charges of vehicular manslaughter.