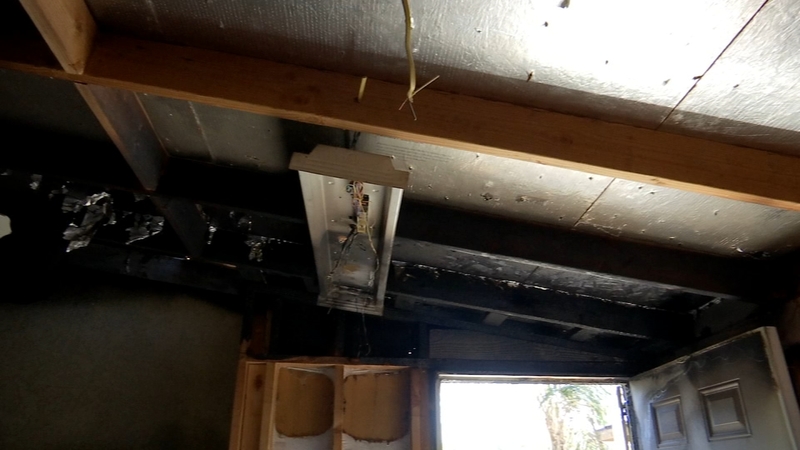 FRESNO, Calif. (KFSN) -- "You hope it doesn't happen to you," says Alex Castenon. "You say it's never going to happen to you."

But it can and it did to the Castenon family.

As illegal fireworks lit up the Fresno County sky on Saturday, one landed on the home adjacent to Castenon's parents near Chestnut and Church.

"It started in the side of neighbor to us," he said. "It started from there and it just carried over."

Castenon's parents had taken sleeping medication like they always do and were fast asleep as the flames spread.

A person driving through the area saw the fire and started honking to alert the neighborhood.

Their neighbor awoke and quickly ran over to help.

"They came and knocked and banged on the door and were able to get my parents out safely," Castenon said.

His parents escaped the fire unharmed but were shaken to their core; particularly Castenon's dad, who's a military veteran.

Firefighters were able to save a majority of the home, but there were still damages.

His mother's lamp that was passed on by her mother was destroyed.

"Things like that can't be replaced, but at least my parents are safe," Castenon said.

Earlier that night, Castenon and his family were here celebrating the Fourth of July.

He noticed a lot of aerial fireworks being shot up in the area, more than he's seen in recent history.

Shane Brown with the Fresno Fire Department says the use of illegal fireworks comes with consequences.

"I'm sure whoever shot that firework didn't intend to burn their neighbor's house down, but that is what they did," he said.

Castenon and his family are now waiting for their insurance company to assess the damages so they can move forward with repairs.

Until then, the family is expressing their deepest gratitude to the driver they say helped save their parents.

"If that person is listening or sees this, I want them to know that I appreciate what they did, Castenon said. "They're an angel."
Report a correction or typo
Related topics:
societyfresno county4th of july4th of july eventhouse firefireworks
Copyright © 2021 KFSN-TV. All Rights Reserved.
TOP STORIES
California to require health care workers to be vaccinated by Sept. 30
Woodville murder victim protected sister before shooting
32-year-old dies after crash at Fresno County auto dealership
No charges to be filed against Central Unified superintendent
Flags stolen outside of Fresno's Veterans Memorial Auditorium replaced
NE Fresno homeowners allowed to sue city over 'tainted' water
Clovis police adding new tool to get drugs off the street
Show More
Federal relief promised for CA farmers impacted by drought
Have Type O blood? Central CA Blood Center needs your help
COVID cases on the rise across the Central Valley
Moderna COVID-19 vaccine remains 93% effective at 6 months
Fire burns through vehicle storage yard in southeast Fresno
More TOP STORIES News