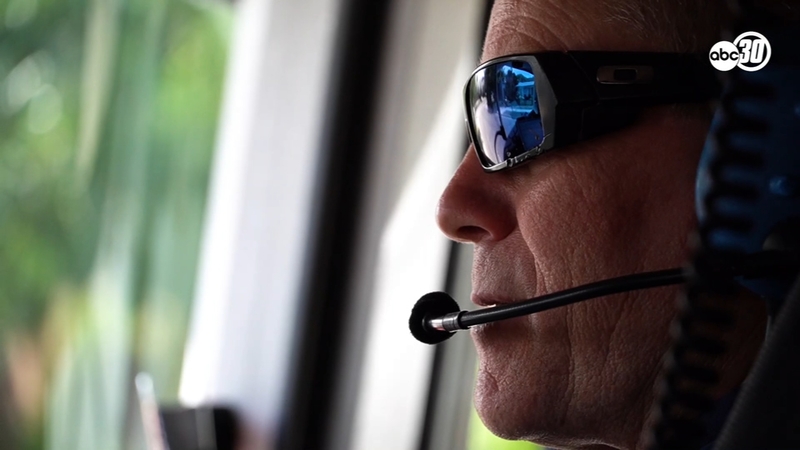 "If you put me in a lineup with a bunch of firefighters and said pick the one who's writing poetry, I'd probably be the last one they'd pick," Wedemeyer said with a smile. He's been a firefighter for 37 years and works as a captain at Fresno Fire's Station 6 in northeast Fresno.

He got the idea to write poetry after reading a book of poems written by an American soldier in Iraq and thought it might be healthy for him to do the same.

He says he's written seven or eight poems to this point, all based on experiences he's had in the field. Some rhyme and some don't, but all are a somber, sobering look at what first responders see.

"We're thrust in someone's nightmare and a lot of it hits home. It could happen to you and you relate to it. That could be my kid or my mom," he said.

One poem is a vivid look into a call Wedemeyer responded to more than two decades ago that has sat with him ever since titled "A Small Boy":

Captain Gary Wedemeyer reads his poem "A Small Boy", which is based on one of his experiences as a Fresno firefighter.

Wedemeyer says that writing the poems has proven to be an effective way of helping him cope with the trauma that comes with being a first responder.

"Talking about it, writing about it, that does help," he said. He does have to deal with the occasional jokes made at his expense.

"I always thought that was a tough thing, hey nothing bothers me I'm tough. That's not healthy. The ones that are healthy are the ones who come back and talk about it, that's the healthy way to deal with it," he said.

Despite the dangers and trauma that comes with the job, Wedemeyer says he wouldn't choose to do anything else.

Wedemeyer's poems were put on display at Fresno Fire Station 3 during ArtHop in May, and he expects his wife to encourage him to do it again. In addition to A Small Boy above, two of his other pieces can be viewed below. WARNING: the poems are based on real accounts and some may consider them to be graphic and disturbing in nature.

Folded in wicked ways that a body doesn't
He lays in the rain filled gutter
Clear tears of the cloud gather red momentum and whisk his blood away
I fumble in my mind with where to start
My training slips away, carrying my calmness with it, and I do what I can to unfold him
Death is here and he knows it
He departs earth with an apology for making me come out in the rain

I'm sorry, I thought you were dead
Not in the house
Or on your bed
You chose the porch
And shot your head
Why out here
I look about
The place you chose
To turn lights out
Down you knelt
To face the chair
Clad only in your underwear
The chair did catch
What blood it could fetch
The chair did hold when death did fold
Hair and skull and brain
The chair did catch
What blood it could fetch
But did nothing for the pain
I know this true
Because when I said to you
That looks like it must have hurt
It was you who said
With face painted red
It does hurt and I'm not dead
Report a correction or typo
Related topics:
societyfresnopoetryfire departmentsabc30.com originalfirefighters
Copyright © 2022 KFSN-TV. All Rights Reserved.
ABC30.COM ORIGINAL
Meet the runner putting a smile on faces of people in Fresno
Parlier teen collecting school supplies for foster youth
Local 12-year-old swims across Lake Tahoe
Recovering addicts helping Fresno's addicted at CAP
TOP STORIES
Body of Missy Hernandez recovered from aqueduct near Huron
At-home COVID-19 test request website goes live 1 day early
Teen killed, another injured in shooting in Orange Cove
1 killed in crash in Madera, Yosemite Ave closed for investigation
Man shot after fight with brother in Madera, suspect in custody
FPU to temporarily move to virtual classes for 2 weeks
Suspected child abuser rearrested after warrant served at church
Show More
Calif. students to get subsidies for volunteering
19-year-old hospitalized after explosion at Table Mountain Casino
Field worker's truck stolen by armed man in Hanford, deputies say
Omicron variant impacts Valley Children's hospitalizations, staffing
Cold case team shines new light on betrayal of Anne Frank
More TOP STORIES News