Authorities shared surveillance video of the armed robbery from inside the trailer.
KFSN
By ABC30.Com Staff 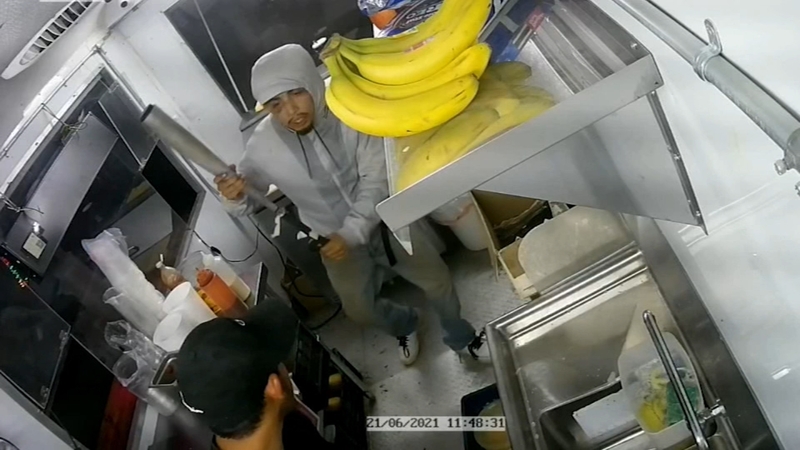 FRESNO COUNTY, Calif. (KFSN) -- Another street vendor targeted. This time, the crime was caught on camera.

"This is a low move, basically an ambush," says Tony Botti with the Fresno County Sheriff's Office.

Video from the night of June 20 shows a suspect with a black eye going into the fruit vendor's truck with a baseball bat, threatening the employee while another suspect is outside pointing a gun at him.

Botti says the employee handed over the money, and the two suspects then drove away. He says street vendors are often easy targets for thieves.

"These two guys have no work ethic or self-respect rather than earn an honest buck than steal from people who do," he said. "We need to get these guys off the street. They're going to do this again."

We spoke with the fruit vendor, who didn't want to go on camera, but says he's still shaken up by the robbery.

Miguel Lopez, a street vendor and the president of the City of Fresno's new Food Vendor Association, says cases like these happen all too often.

He says from the moment they leave their home, street vendors worry if they'll be the next victim, or if it will be someone they know.

The city's association was created shortly after the murder of Lorenzo Perez, a street vendor in Fresno.

Lopez says they're still working with the city to revamp a warehouse near Chukchansi Park in Downtown Fresno in hopes of creating a safe place for vendors.

Lopez is also urging other street vendors to speak up and not be afraid to report any crimes against them to authorities.

Anyone with any information is all to call the sheriff's detectives or crime stoppers.