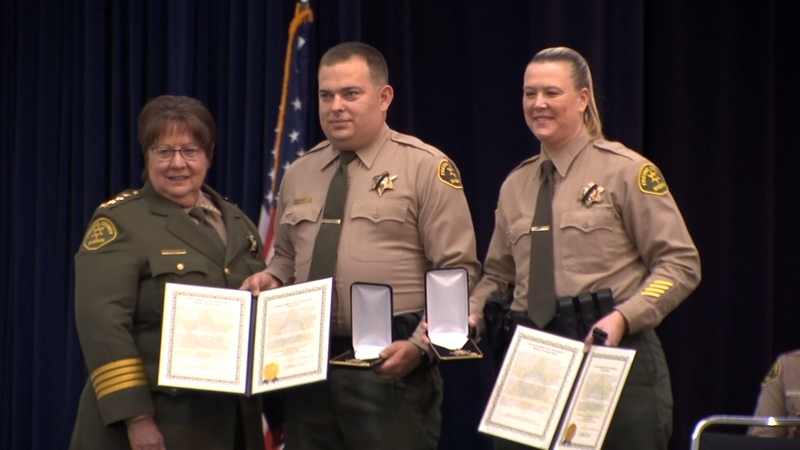 FRESNO, Calif. (KFSN) -- At a ceremony to celebrate some of Fresno County's finest, two sheriff's deputies were honored above all for their bravery.

In front of colleagues, family and friends, Sheriff Margaret Mims presented Deputy Jeremy Doty and Deputy Courtney Bush with the Life Saving Medal for providing aid to a suspect who hurt himself while climbing a security fence to try to get away from them.

"While climbing over the fence, the suspect sustained major lacerations to his left and right hands, wrists and also his right leg. Upon noticing the amount of blood loss, Deputies Doty and Bush retrieved their medical kits in their vehicles."

The prestigious award recognizes deputies who exhibited an extraordinary performance from the past year that resulted in saving a life.

"Noticing the large amount of blood that was starting to pool up on the suspect's wrists," Doty said. "Asking him 'Are you okay?' He tried to say yes and then started passing out. Right then is when we knew we needed to act immediately or he was probably going to die."

The February incident started as a search for a suspect who had allegedly pistol-whipped his ex-girlfriend.

After leading deputies on a short car chase, the suspect jumped out of his vehicle and tried to climb a fence that had razor wire at the top. That's where he suffered serious injuries, and that's when Deputies Doty and Bush had to switch from crime fighters to lifesavers.

"Our first priority in law enforcement is to protect and serve," Bush said. "Even though he's a bad guy, even though he's committed a few felonies or whatever he's done, that's our job to render aid."