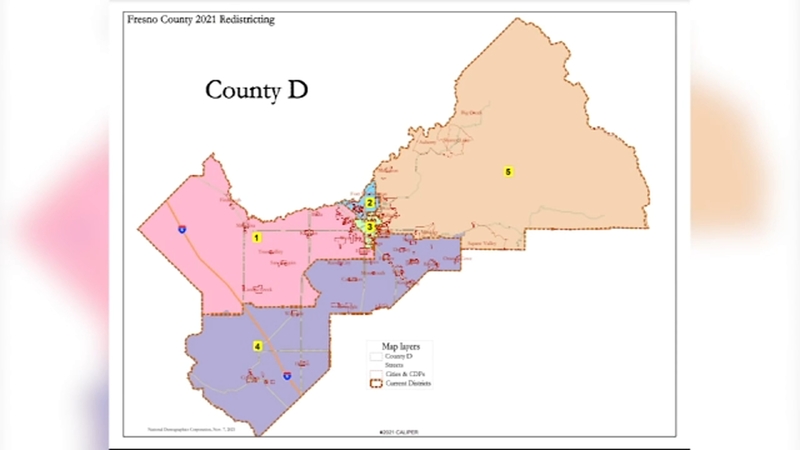 FRESNO, Calif. (KFSN) -- The Fresno County Board of Supervisors made a final decision Tuesday on a map defining the county's districts for the next 10 years.

The decision came with a large turnout of people critical of the board's decisions so far. More than two dozen people spoke to the board, giving their opinions on what the final map should include and which to stay away from.

"We deserve fair and honest representation that serves us and it's abundantly clear with this 101B map and its variations, that we deserve better," said Warren Hubbard.

Some members of the public argued the supervisors ignored previously submitted community-drawn maps to keep their seat on the board.

"What's clear is that community voices have not been heard or listened to, have not been respected and that the interest of keeping your own seats has taken priority," said speaker Venise Curry.

However, the supervisors pushed back and said they chose to move forward with map 101B at the last meeting based on the recommendation of the Advisory Redistricting Commission.

"We need to remember that the only map that got a 9-0 vote was 101B," Supervisor Buddy Mendez said.

"I believe there are no perfect maps, but we're going to have to do the best we can," he said.

The board ultimately decided to go with County Map D, which was created after the November 2 meeting.

County staff said it embodies the three recommended maps from the advisory board and recommendations from Maps 116 and 125, which were created by the Equity Map Coalition.

The map will move about 4,300 people north of Herndon, west of the railroad tracks to Highway 99 into District 2 from District 1.

It will also more about 14,600 people from a section west of Highway 168 into District 3 from District 5.

An additional 15,700 people between Temperance and Peach, north of Jensen to the railroad tracks will be moved into District 4 from District 5.

The board will come back on December 14 to adopt a resolution which requires a 4/5th vote.