'No one wanted my side of the story': Fresno officer allegedly affiliated with Proud Boys speaks out 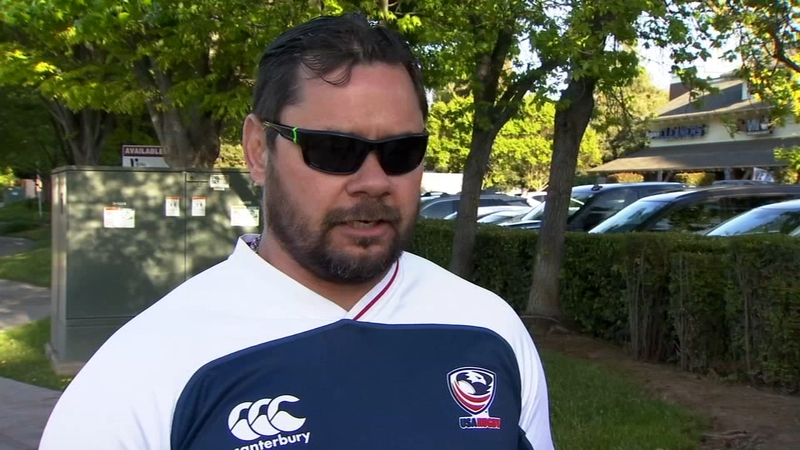 FRESNO, Calif. (KFSN) -- A Fresno police officer says he was fired with a phone call.

Rick Fitzgerald is speaking out hours after both the Fresno Police Department and the city's mayor announced he was terminated from the department for his involvement with the Proud Boys, a far right, extremist group.

Fitzgerald was put on administrative leave once the accusations came to light just three weeks ago when he was seen wearing clothing associated with the group while attending the Tower Theatre protests.
He didn't deny that he was once affiliated with the group, but says after seeing their behavior in Sacramento, he immediately walked away.

"I saw how some conducted themselves and said this is not something I want to be a part of, because there's no honor or integrity. I left the next day and started my own group, The Sons of 76. We just do community and charity," Fitzgerald says.

FIRED FROM THE FORCE: Rick Fitzgerald speaks out after both the Fresno PD & Mayor announced his termination. He was put on administrative leave in March amid allegations involving his ties to the Proud Boys group.More on how he’s responding & how he’s fighting back at 11 @ABC30 pic.twitter.com/9u4px9jD0c

He says he was already part of his new group, Sons of 76, the day he was seen at the theatre protest, and left once members of the Proud Boys showed up.

Fitzgerald was expecting to meet with the chief Monday to share his side of the story before he received the call.

"They sent me the package of what they were terminating me for and there was zero evidence of anything racial," he says. "No one reached out to me, no one wanted my side of the story, they just said, 'You're terminated'. I said, "Oh so this is how you want to do business?'"

Fitzgerald says he's been with the department for nearly 20 years and says he doesn't plan to go out without a fight in court.

"I did my job with integrity, I have no major cases against me, even with this they have no evidence of racism. I won't take this sitting down."

In a statement, however, Fresno police chief Paco Balderrama said he still stands by his disapproval of any police officer affiliated with hate groups, or any other group known for engaging in violent behavior.

Today the FPOA was made aware that Officer Rick Fitzgerald's employment with the City of Fresno / Fresno Police Department had been terminated. At the time of his termination, Officer Fitzgerald had not been afforded a hearing or been given the opportunity to provide any statement in his own defense.

Upon notification of Officer Fitzgerald's termination, the FPOA spent the remaining day, into the evening, consulting with legal counsel and conducting legal research in an attempt to assess whether his due process rights had been violated. Our consultation and legal research into this matter are ongoing.

The FPOA fully supported Chief Balderrama's initial decision to conduct a thorough and objective investigation into this matter. However, this investigation was not given opportunity to be carried out to its completion before a judgement was rendered and discipline was executed.

We want to reiterate our shared concern regarding the allegations raised, as well as our support for accountability within our department and profession. As a department, city, and community, our call for accountability must be consistent. This also holds true in holding to account all those entrusted with the power to carry out due process; that they do so appropriately and without prejudice.

It is not the role of the FPOA to defend officers in regard to allegations made against them. The role of the FPOA is to support and defend the rights afforded to our members under due process, in the very same way we support due process rights for everyone within our community.
Report a correction or typo
Related topics:
fresnolawsuitfresno police department
Copyright © 2021 KFSN-TV. All Rights Reserved.
TOP STORIES
Man arrested for punching Visalia police officer in the face
Man shot several times after argument in central Fresno
Bobby Salazar files defamation lawsuit against Fresno attorney
Boy arrested after bringing gun to Kingsburg school, deputies say
Fresno Co. reports CA's first case of St. Louis encephalitis this year
Authorities searching for Brian Laundrie in vast nature reserve
4.3 magnitude earthquake hits Carson area, rattles SoCal
Show More
Internal Fresno police audit reveals continued outside work violations
Fresno Unified and Clovis Unified desperately need substitute teachers
Downtown Fresno is getting a parking meter makeover
2 of CA Gov. Gavin Newsom's kids test positive for COVID-19
Robert Durst found guilty in murder of Susan Berman
More TOP STORIES News