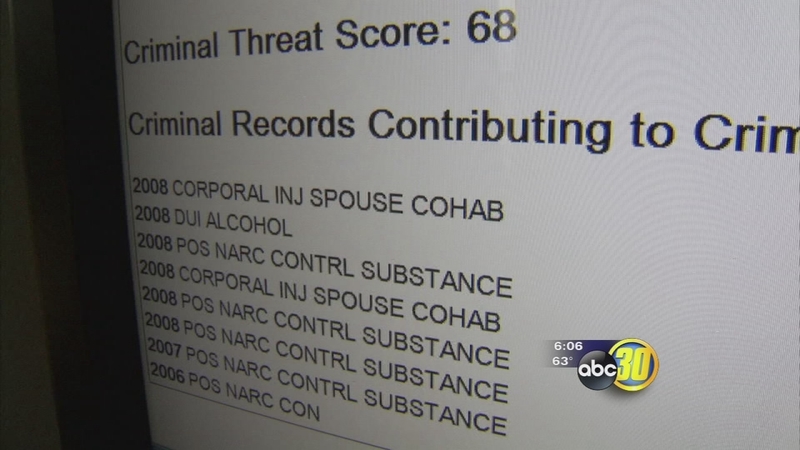 FRESNO, Calif. (KFSN) -- Fresno police are at the forefront of a new technology designed to figure out how much danger officers may be getting into as they respond to 911 calls. But the product is drawing comparisons to Big Brother because of the massive amount of personal information it collects.

At least two cops might be alive today if they had access to the software we got to see. But once it's put to use by police, you have to watch what you say or risk being labeled a threat.

Before the assassination of two New York police officers in December, an obvious warning was there for anyone to read. But the message in the killer's public Instagram post never reached officers Liu and Ramos. Two months later, every call to Fresno police dispatchers could give similar warnings the chance to reach officers through new software known as Beware.

"To the extent that there is information that is in the public domain, regardless of where the input was derived, it could potentially be surfaced through a Beware query," said Allen Carr, vice president of Intrado, the company producing and marketing Beware to first responders of all types.

Intrado buys billions of pieces of commercially available personal information -- the same stuff credit agencies have. It adds arrest records from police databases and within seconds, gives a quick look at who lives at any address and a profile for every person associated with the address.

"That's me," an Action News reporter said as he examined the software in action. "That's my Social (Security number). That's my date of birth. That was my phone number in Houston the last time I had a landline."

The software computes a numerical threat score or risk index for each person and assigns a green, yellow or red rating. In our reporter's case, the risk index was zero and the threat level was green.

The company doesn't like to disclose the calculations behind its index, but in addition to criminal records, social media posts are part of the equation. An Instagram post including "#ShootThePolice" -- like the one posted by the NYC shooting suspect -- would increase the risk index. But we also found a Fresno woman whose score went up for posting on Twitter about her card game that happens to have "rage" in its title.

"It doesn't make them a criminal necessarily, some of those comments, but it certainly gives the officer an awareness that this person may have an anti-police sentiment and be an increasing level of threat to them," said Chief Dyer.

But that type of math has civil rights advocates calling the software a miscalculation for Fresno police. They say, instead of protecting police officers, it could add danger by creating more mistrust in the people they see.

"(Members of the public) want the person to actually know them and not to depend on some computer algorithm, some data mining process," said Fresno civil rights attorney Robert Navarro.

Beware just hit the market last year and already one small city in Washington state rejected it because of privacy issues and the cost. Fresno is getting it for free for 18 months as a sort of pilot market to launch the software in bigger cities. Chief Jerry Dyer says he understands the civil rights concerns, but the information is public and it may prove critical to officer safety.

"Oftentimes, when a call comes in to dispatch, we have minimal information provided to us and so our officers are driving into the scene expecting to known the unknown and then to make these split-second decisions with limited facts," he said.

Dyer says officers will have to apply a little common sense and judgment -- digging deeper to see what's behind a risk index, so they aren't necessarily on high alert for a person "raging" about a game. But if the software works in Fresno, Beware will have the green light to go worldwide.

Fresno police should have access to Beware in the next few weeks, but Chief Dyer already knows one addition he'd like to see. He wants to find a way to add mental health information to the database to help officers know if they're heading into a potentially unsteady situation. For now, though, health privacy laws won't allow it.