Arrests made after violent fight breaks out at Fresno State game

Our own Action News camera caught one of the men swinging at Fresno police officers as they tried breaking up the fight.
KFSN
By Nic Garcia 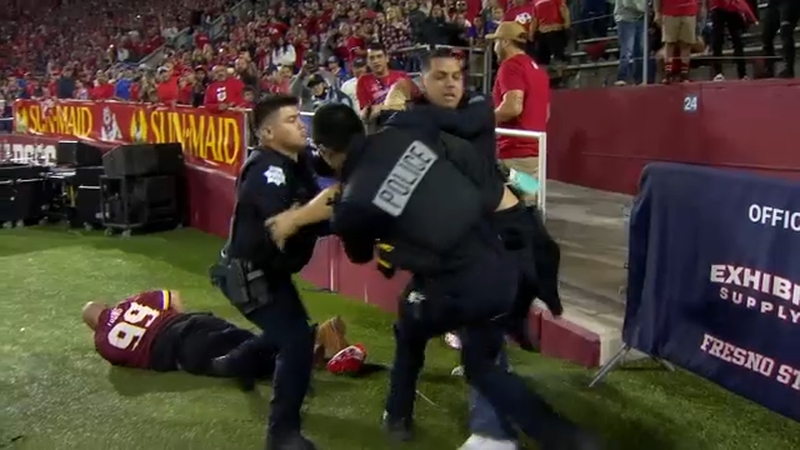 Arrests made after fight breaks out at Fresno State game

FRESNO, Calif. (KFSN) -- A violent fight broke out at the Fresno State vs. Boise State game on Saturday.

Fresno police confirm one fight happened in the stands around 6:30 pm.

Armando Gonzalez, an eyewitness, caught about six minutes of video of the fight on his cell phone.

"At first it was yelling and then pushing and shoving and escalated to what everybody has seen," said Gonzalez.

"I kept my distance. I was more worried about the elderly and children getting pulled into that mix," said Gonzalez.

Our own Action News camera caught one of the men swinging at Fresno police officers as they tried breaking up the fight.

The Fresno Police Department is releasing very little information about the disturbance but did confirm to Action News one suspect resisted officers and was arrested.

"Sold out crowd, a lot of alcohol, a lot of fighting going on after halftime," said Gonzalez.

Alcohol was banned from Bulldog Stadium in 2006 due to unruly behavior.

It was allowed back into the stadium in 2017.

Action News reached out to Fresno State to ask if Saturday's fight will make it reevaluate the decision, but we have not heard back yet.

Gonzalez said after capturing the now-viral video he left the game, no longer feeling safe.