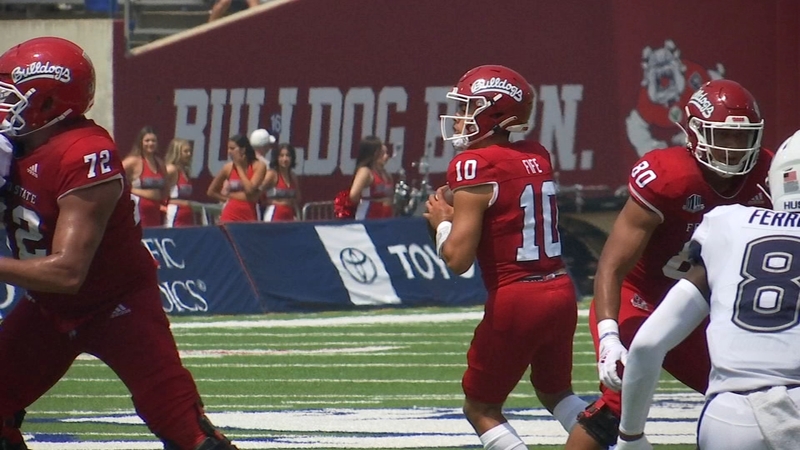 Jeff Tedford brought Grubb to the Valley back in 2017 to serve as the team's offensive line coach and run game coordinator. Grubb has been the Dogs OC since 2019 & this past season, helped lead FS to the #1 total offense in the Mountain West.

In just 12 days time, FS (9-3) will play UTEP (7-5) in the PUBG Mobile New Mexico Bowl. The Dogs are now missing a head coach, offensive coordinator and quarterback with Jake Haener leaving for the transfer portal.

Interim coach Lee Marks said in a zoom press conference that wide receiver coach Kirby Moore will be the Dogs fill in OC and will call the plays against the Miners. As for the starting quarterback, Marks says that's an open competition between Logan Fife and Jaylen Henderson.

"We're going to allow those guys to split the reps and compete and we'll see who will end up starting in the bowl game," Marks said.

Open competition at this point for who will be the starting QB in Fresno State's bowl game. It's between a pair of freshman in Logan Fife and Jaylen Henderson. Both have seen limited action in 2021 but have a combined 1 completion against FBS opponents. More tonight at 6 @ABC30 https://t.co/rtv6Qvo1oV pic.twitter.com/YI2cxg51lo

Both are freshmen. Fife is a redshirt freshman who was 7 for 13 throwing the ball in his one game against UCONN. He also threw for a touchdown and an interception.

Henderson is a true freshman and the younger cousin to former Bulldog Chris Carter.

Henderson has been the primary back up to Haener and provides more of a threat running the football, breaking free for a 40 yard game against Cal Poly.

"It was really really neat to see all those guys (seniors) say you know what, 'the standard is the standard'," Marks said of the emerging leaders in the absence of Haener. "We gotta continue to be the best and make sure that we finish the season the right way."

As for the head coaching search, ESPN's Adam Rittenburg reports that FS is closing in on a deal to bring Jeff Tedford back as a coach.

A deal could happen later this week. The school has interviewed other candidates and ESPN's Kyle Bonagura reports two names as possible candidates "involved in the search process".