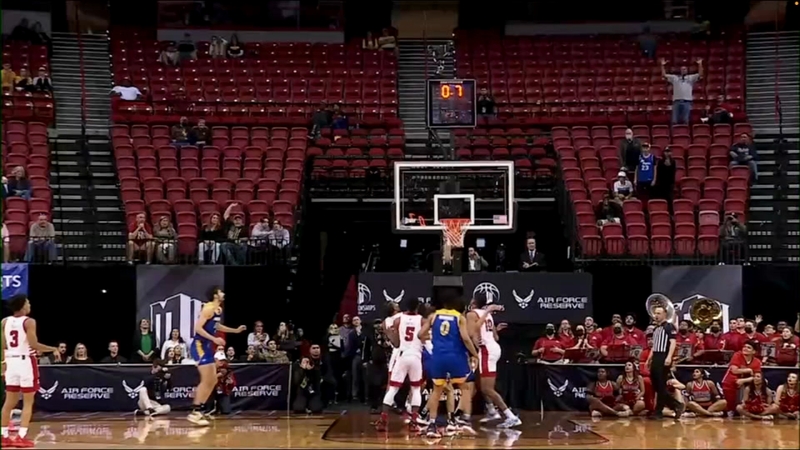 FRESNO, Calif. (KFSN) -- It took overtime, but the Fresno State men's basketball team moves on to the quarterfinals of the Mountain West Tournament. The #6 Bulldogs topped San Jose State 69-67 in OT thanks to 31 points from junior forward Orlando Robinson.

"It's March, we knew they were going to bring the fight every team in this conference is a good team," Robinson said.

The #11 Spartans came into the game with just one conference win but tied the game in the final ten seconds thanks to a layup from Omari Moore who had a team-high 19 points. Isaiah Hill, who scored 14 points, missed a game-winner at the buzzer to send the game to the extra period.

"We knew they weren't going to lay down, they got some seniors on there so they knew it was survive and advance," Hill said.

Justin Huston on his team's fatigue after playing back-to back-to back overtime games:
"Tomorrow I told the guys that we wanted 2 guys there on the bench that are going to get a chance to get a little bit more minutes. If we see that you're ready to go, you're going to carry us."

With the game tied at 67, Jordan Campbell hit what proved to be the game winning basket with 0.5 seconds to play.

"You get into the conference tournament everybody's 0-0 so we expected San Jose to be good tonight and we brought some fight to us we just couldn't make any shots tonight but I'm proud of our guys," head coach Justin Hutson said.

"We threw as many things as I can even imagine at Orlando Robinson, he still got 31. He might've got 50," said Spartans coach Tim Miles. "They've (FS) got a special player, they're elite defensively, they'll probably look at today like oh we're going to shoot it better next time we're going to make our free throws next time right and they might."

Tipoff tomorrow from the Thomas & Mack Center is set for 8:30 PM with the game broadcast on the CBS Sports Network.