Fresno State responds to post by student organization towards veteran 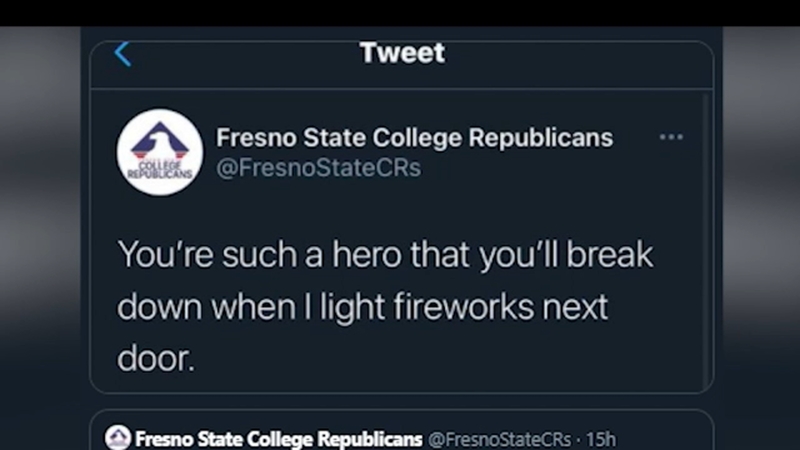 Fresno State responds to post by student organization towards veteran

FRESNO, Calif. (KFSN) -- Whether it's TikTok or Instagram, we've seen plenty of influencers, Hollywood stars and comedians stressing the importance of vaccines and masks.

But one post from February is getting a lot of attention after someone from Fresno State shared it.

"I made it and I was purposefully trying to be antagonistic," they said. "I wanted it to annoy them and it didn't take, and I moved on and then yesterday or two days ago, it went off on alt-right Twitter and got it to like 80,000 views in a couple of hours."

As for the reaction, a tweet from Fresno State College Republicans suggested the disabled veteran would break down if the author lit fireworks next door.

That was followed by a second comment calling the vast majority of our military glorified DMV employees.

"Awesome, you're a public account and I'm going to make fun of you the most," Loller said. "Then they doubled down and I was like, 'This is going terribly for you.'"

The organization hasn't responded to several requests for comment from Action News, but pinned a tweet to their page, saying, "The CSU Fresno College Republicans have always supported and appreciated our military members, veterans and all who have made sacrifices for our great nation. Security passwords have been changed to avoid any further distasteful posts and need for anything similar to be removed."

Loller is not looking to see the organization punished, noting freedom of speech.

"But free speech comes with consequences, and those consequences are I'm going to mock you on the internet to hundreds of thousands of people," they said.

The comedian served in the Connecticut Army National Guard from 2006 until being medically discharged for combat injuries sustained in 2016.

Loller is now using this to shine a light on the treatment of veterans across the country.

"Most of the homeless are veterans," they said. "The suicide rate is astronomical. There are all these problems that are just kind of pushed under the rug, and it infuriates me."