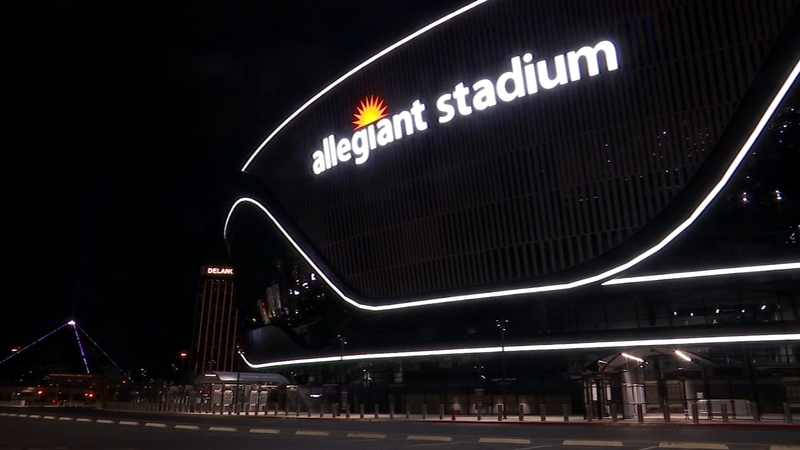 FRESNO, Calif. (KFSN) -- In the first game the Fresno State Bulldogs played in front of fans in the 2020 season, they came out victorious against UNLV by a final score of 40-27.

The game was played inside the new Allegiant Stadium, home of the Las Vegas Raiders and former Bulldog Derek Carr. About 2,000 fans were allowed inside the stadium.

Senior running back Ronnie Rivers continued to rise up the record books of Fresno State football, giving flashbacks of his dad in a Bulldog uniform.

In the first game the Fresno State Bulldogs played in front of fans in the 2020 season, they came out victorious against UNLV by a final score of 40-27.

Rivers finished the day with 232 total yards and a career-high four touchdowns, the most by a Mountain West player in a game this season.

Rivers kept the defense guessing and rarely went down on the initial tackle attempt by UNLV's defense.

HAVE. A. DAY. @lilronnie_20 has a single-game career-high 4⃣ touchdowns, and has the most touchdowns in a game by any @MountainWest player this season‼️#GoDogs | #PrideOfTheValley pic.twitter.com/qBeYw3v3k9

Starting quarterback Jake Haener saw most of the reps, though, and continued trending upward in terms of taking care of the football. Haener had his second straight week of 0 turnovers with 164 yards and ran for one touchdown Saturday afternoon, leaving most of the gameplan to feeding Rivers during his career day.

While the Bulldogs' defense struggled to contain quarterback Max Gilliam through the first three quarters, they were finally able to slow him down in the fourth quarter with a sack and interception. A big 71-yard touchdown run from Gilliam tied the game at 27-27 late in the third quarter, but the Bulldogs took over in the fourth and left Allegiant Stadium with a victory.

Junior Chris Gatson made his impact felt on the defensive end for the Bulldogs, picking off Gilliam twice and saying post-game that the team has found their rhythm three games into the season.

Next up for FS is another road game against Utah State (0-3). Kickoff is set for 11:30 am on 11/14. The game will be broadcast on FS2.
Report a correction or typo
Related topics:
sportsfresnofresno state bulldogs
Copyright © 2021 KFSN-TV. All Rights Reserved.
More Videos
From CNN Newsource affiliates
TOP STORIES