Over the years, he's won over the hearts of students and staff who considered him family.
KFSN 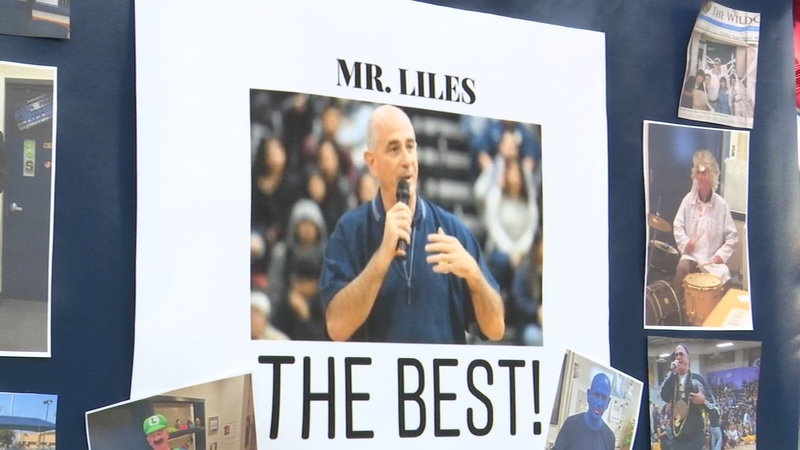 Tim Liles, a long time employee with the Fresno Unified School District, lost his battle with cancer this week.

Liles started as a teacher at Sunnyside, working his way up to his dream of becoming principal.

Several vigils were held for the educator throughout the day.

Along with being a principal, many say he was the biggest cheerleader for the school and students he always put first.

"For thousands of kids, thousands of adults, this place has been home. He's been a huge part of making that happen," said Sunnyside employee Tasha Hicks.

"Stronger Together" was the message on Wednesday night as dozens of alumni stood at the front gates of the school Principal Liles called home since its inception.

Over the years, he's won over the hearts of students and staff who considered him family.

Gwendolyn Gonzalez says she was one of the first students at Sunnyside, and Liles was her teacher.

Later in life, he went on to become her mentor and a father figure.

"He brought us all together and he's still doing that. His message and what he stood for isn't going to die," she says.

He says Liles worked for the district for 28 years, also serving Edison and Roosevelt High School, and Ahwahnee Middle School, until he ultimately came back home to Sunnyside as principal in 2012.

Students spent early Wednesday paying their respects while schools across Fresno displayed their messages of love.

Several say he taught them life lessons that go beyond the classroom and the mark he made in the Wildcat community will live on.

Several people have stopped by the school to write letters and give flowers to the Liles family, letting them know of the mark he made on them.

School officials ask that if you have anything you want to give to the family during this time, to please send it to Sunnyside High School, or go by and drop it off.
Report a correction or typo
Related topics:
societyfresno sunnysideobituaryfresno unified school district
Copyright © 2021 KFSN-TV. All Rights Reserved.
TOP STORIES
Crackdown on Fresno's gang violence is showing results, police say
Fresno State Bulldogs rise to #18 rank in AP college football poll
KNP Complex Fire grows by over 3,000 acres in last 24 hours
OH haunted house actor stabs boy, 11, while trying to scare him
Madera police say 2 killed in separate homicides overnight
15-year-old boy hospitalized after shooting in central Fresno
New Dutch Bros location opens in Porterville
Show More
Officials investigate after Amtrak crash involving train from Chicago
Hundreds come together for Old Timers' Parade in Madera
Protesters call on leaders to stop evictions in the Valley
Air purifiers could protect you from Valley's pollution, doctor says
Fresno County residents can now get the flu shot at drive-thru clinics
More TOP STORIES News