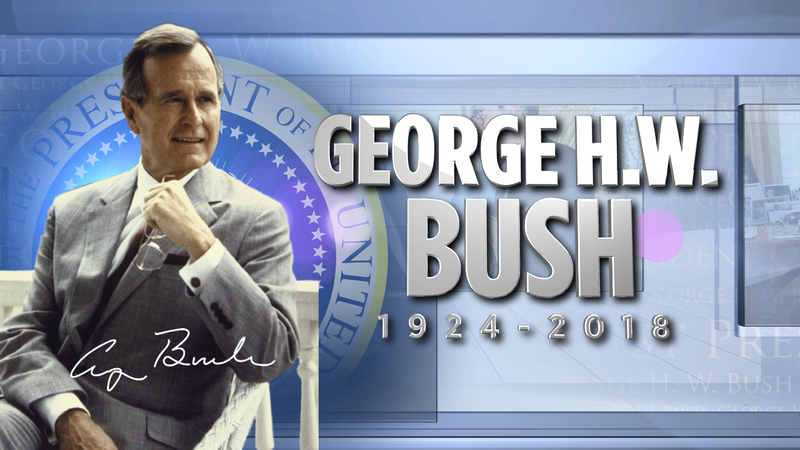 The life and career of George HW Bush

HOUSTON, Texas -- Former President George H.W. Bush has died at age 94, according to the family's spokesperson.

Statement by the Office of George H. W. Bush on the passing of the 41st President of the United States of America this evening at 10:10pm CT at the age of 94. pic.twitter.com/XUPgha2aUW

Bush, who served as U.S. president from 1989 to 1993, has a form of Parkinson's disease and used a motorized scooter or a wheelchair for mobility.


Bush was hospitalized for 16 days in January 2017 for pneumonia. During that hospital stay, which included time in intensive care, doctors inserted a breathing tube and connected him to a ventilator.

He was hospitalized in Maine in 2015 after falling at his summer home and breaking a bone in his neck, and was hospitalized in Houston the previous December for about a week for shortness of breath. He spent Christmas 2012 in intensive care for a bronchitis-related cough and other issues.

Despite the loss of mobility, Bush celebrated his 90th birthday by making a tandem parachute jump in Kennebunkport, Maine. Bush led a group of 40 wounded warriors on a fishing trip at the helm of his speedboat, three days after his 92nd birthday celebration. Bush could commonly be seen cheering on the Houston Astros throughout his retirement years in Houston.

In honor of his 90th birthday, the former president jumped out of a plane - again


He and former First Lady Barbara Bush marked their 73rd wedding anniversary on Jan. 6. The Bushes hold the record for the longest-married presidential couple.

If you need evidence that true love exists, look no further than George H.W. and Barbara Bush.

His son, George W. Bush, was elected president in 2000 and served two terms. Another son, Jeb -- a former Florida governor -- made an unsuccessful bid for the GOP nomination in 2016. Only one other U.S. president, John Adams, had a son who also became president.

Before serving as president, Bush was a former U.S. Navy pilot and lieutenant during World War II.

During a bombing raid against the Japanese on Chichijima, Bush's Grumman TBM Avenger aircraft took a fiery hit. With his engine ablaze, Bush bailed out of the aircraft and was left floating on the water for several hours until he could be rescued.

After graduating from Yale, Bush moved his wife Barbara and children to west Texas, where the family ventured into the oil business.

In 1959, the Bush family moved along with Zapata Offshore Company to Houston, where he continued to serve as president.

Bush, who served as chairman of the Harris County Republican Party, was sworn into the U.S. Congress in 1967, and after two terms, was named U.S. Ambassador to the United Nations under President Richard Nixon.

He also served as chairman of the Republican National Committee, chief of the U.S. Liaison Office to China under President Gerald R. Ford, and then director of the CIA.

Bush was elected president in his own right in 1988, defeating former Massachusetts Gov. Michael Dukakis.

He only served a single term as president.