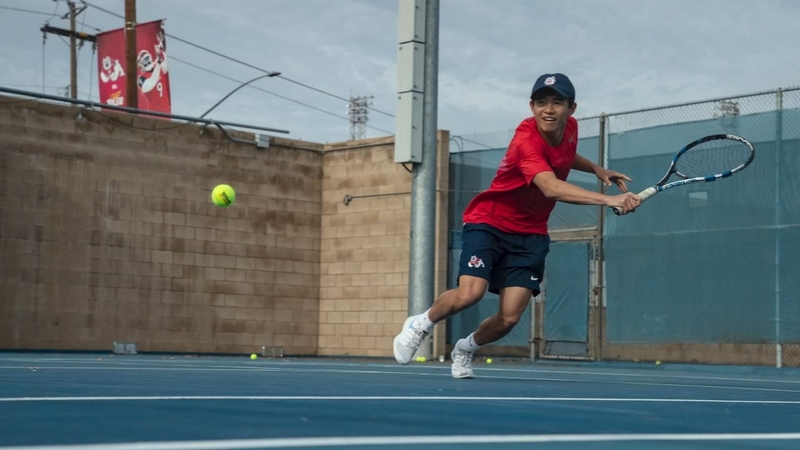 Being a tennis player and a mechanical engineer major required a lot of self-discipline.

Bailey's father is a Fresno State Alumn and he grew up attending tennis matches as a kid. However, his dream school was Cornell. After two years at Fresno State, he had the opportunity to transfer to the Ivy League school, but instead he chose to stay in the Valley.

"I was really fortunate because not only did I have my tennis students but I was also in The Smittcamp Family Honors College, an honor college where they take in 50 students a year," said Bailey.

The Bulldog was named an Academic All-American his senior year and still reminisces about the moments he shared with his teammates on the court.

"The best memory is winning Mountain West my junior year. Believe it or not, waking up and having 6:30 am workouts was actually pretty memorable. Even if at the time I didn't like it, looking back on it was pretty special. To be able to wake up at the crack of dawn and have a bunch of guys to motivate you," he added.

He got into Cornell's graduate food science program which is the top program in the country. He hopes to design food processing equipment to better help society.

"I'm really looking forward to finally learning about food, I feel like I've been waiting the past four years to do so," Bailey said.

So where did his passion for food come from? Bailey and his father used to watch the Food Network together all the time.

Bailey is now starting his next chapter at the school he's always wanted to attend, but when asked what it's like to finally wear Cornell across his chest, he had this to say:
"I guess when I was younger I thought it would be really cool, but I don't know maybe it's the natural rebel in any human nature but now I just want to wear Fresno State. Go Dogs. Let people know that I didn't start from some high up place, that I earned it."
Report a correction or typo
Related topics:
sportsexetergood sports
Copyright © 2022 KFSN-TV. All Rights Reserved.
GOOD SPORTS
Good Sports: Fresno woman gains recognition with indoor rowing
Good Sports: The rapid popularity growth of pickleball
Good Sports: Clovis native on cusp of racing stardom
Good Sports: 21 girls from Clovis Crossfire Soccer sign scholarships
TOP STORIES
Fire damages 2-story townhouse in northwest Fresno
1 severely injured in trailer fire in Winton, officials say
Driver arrested after police chase in Fresno County
Justices to hear challenge to race in college admissions
Valley firefighters sent to help battle fire in Big Sur
Loved ones grieve for Missy Hernandez at Fresno vigil
PG&E's criminal probation to end amid ongoing safety worries
Show More
Tax filing season starts Monday. What to expect for 2022
Fresno's famous 'dancing teacher' appears on Ellen Show
5 tax changes that can boost your refund this year
LA Unified requiring students to wear non-cloth face masks
Woman finds $3M lottery prize in her spam folder
More TOP STORIES News