Half prioritize gun violence laws, down from its post-Parkland level: POLL 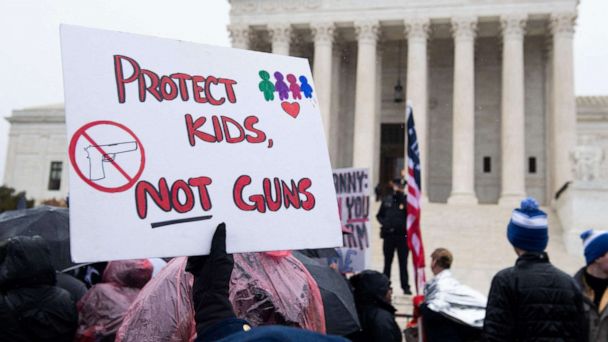 The public's priority on enacting new laws to try to address gun violence has waned from its level three years ago, despite continued mass shooting incidents across the country.

Fifty percent in this ABC News/Washington Post poll prioritize enacting new gun violence laws while 43% prefer a focus on protecting the right to own guns, a seven-point margin. That's narrowed from a 23-point, 57-34% preference for new legislation in April 2018, after the Parkland, Florida, high school shooting that killed 17, prompting national gun violence protests.

The decline brings a return to a closer division of opinions even with a series of shootings since mid-March, including ones leaving nine dead at a FedEx facility in Indianapolis, 10 dead at a grocery store in Boulder, Colorado, and eight dead at three spas near Atlanta. 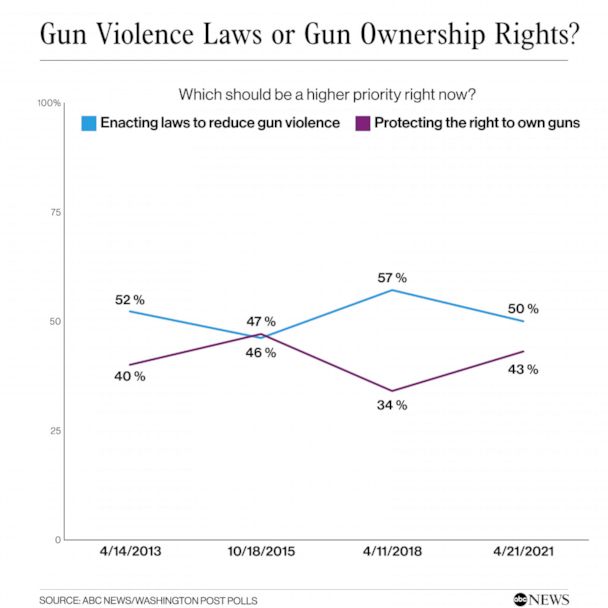 Intensity of sentiment also is about evenly divided in this poll, produced for ABC News by Langer Research Associates, with about four in 10 in both camps saying they feel strongly about their preference.

President Joe Biden has responded to the recent shootings by announcing six executive orders and expressing support for new legislation. The public fractures on his approach: Thirty-two percent say he's doing too little, while an identical share say he's doing too much in terms of enacting laws to try to reduce gun violence. Nearly as many, 28%, think he's doing the right amount.

Views that Biden is doing too little peak among liberals, at 52%; those who prioritize new laws over protecting gun rights, 48%; and also within his own party: Forty-seven percent of Democrats say the president is doing too little to try to enact new laws intended to curb gun violence.

Conversely, about six in 10 Republicans and people who prioritize protecting the right to own guns think Biden is doing too much. Views among independents are mixed, with 36% seeing Biden's actions as "too much," 29% "too little" and 28% the right amount. 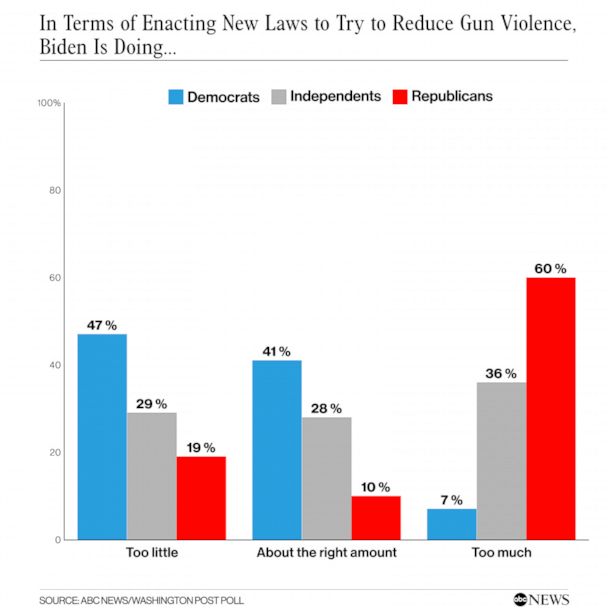 Divisions across political and ideological lines remain sharp. Three-quarters of Republicans prioritize protecting the right to own guns, as do 68% of conservatives -- including 81% of strong conservatives. Conversely, 83% of Democrats and liberals alike favor enacting new laws to try to reduce gun violence. Independents split 48-43% between protecting gun rights and enacting new laws.

Among other groups, rural adults favor protecting the right to own guns by a 2-1 margin, 60 versus 30%. That essentially flips among urbanites, with 61% favoring new laws versus 34% for protecting gun rights. Suburban residents divide evenly, 48-45%.

This ABC News/Washington Post poll was conducted by landline and cellular telephone April 18-21, 2021, in English and Spanish, among a random national sample of 1,007 adults. Results have a margin of sampling error of 3.5 percentage points, including the design effect. Partisan divisions are 33-24-35%, Democrats-Republicans-independents.