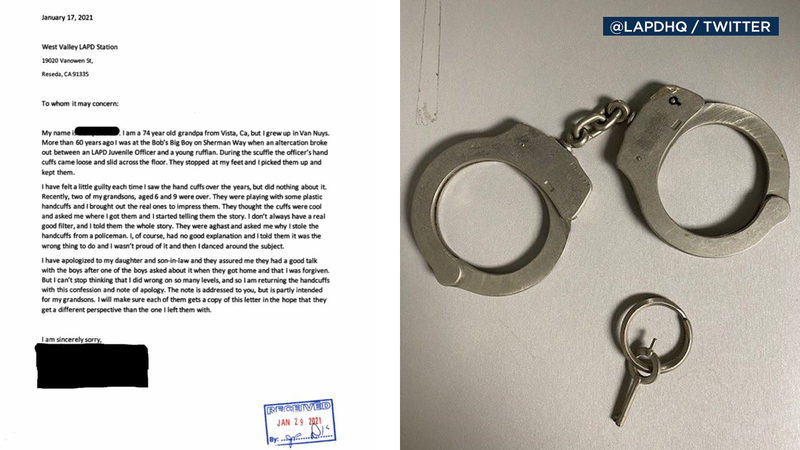 Man returns handcuffs he took from LAPD decades ago

LOS ANGELES, California -- Grandparents can pass along powerful life lessons to the next generation. One man is trying to do just that by teaching his grandchildren that it's never too late to make amends.

On Thursday, the Los Angeles Police Department posted on social media that its West Valley Station received an interesting package: a pair of handcuffs, $100 and a heartfelt letter of apology.

The person who sent it? A 74-year-old grandfather from Vista in San Diego County.

More than 60 years ago when the man was a teen, he was at a Bob's Big Boy restaurant when he witnessed a scuffle involving an LAPD officer. He ended up with the officer's handcuffs after they flew off and slid toward him.

An envelope arrived at LAPD West Valley station. Inside a letter of apology, a $100 donation & a pair of handcuffs.

This was no ordinary letter. It was a life lesson over 60 years in the making, from a grandfather to his grandkids—that it’s never too late to do the right thing. pic.twitter.com/BVzYXb9qzL

He picked them up, took them home and held on to them for all this time.

"I have felt a little guilty each time I saw the handcuffs over the years, but did nothing about it," the man wrote in the letter.

Recently, his grandsons - ages 6 and 9 - visited him and were playing with plastic handcuffs. That's when the grandfather showed him the handcuffs he had and shared the story of how he got them.

"They were aghast and asked me why I stole the handcuffs from a policeman. I, of course, had no good explanation and I told them it was the wrong thing to do and I wasn't proud of it and then I danced around the subject," the letter says.

Feeling guilty, he sent back the handcuffs to the LAPD, along with the donation and the apology that LAPD later posted on social media.

"The note is addressed to you, but is partly intended for my grandsons," the grandfather wrote.