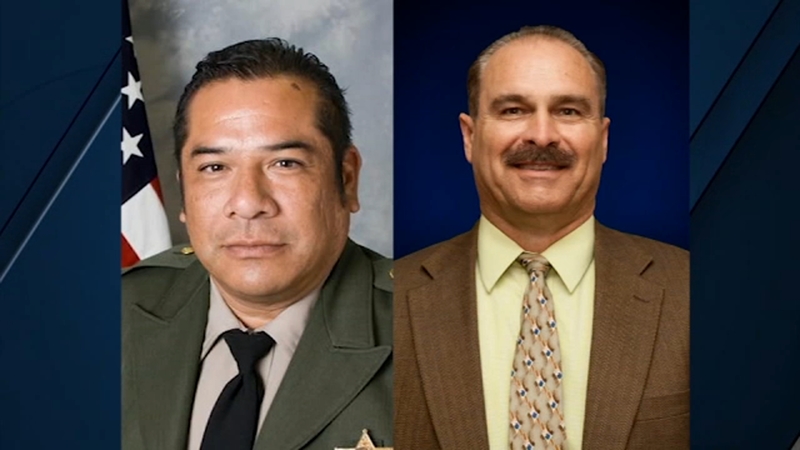 2 who died from COVID-19 added to Tulare Co. memorial

TULARE COUNTY, Calif. (KFSN) -- A somber ceremony took place at the corner of Burrel and Woodland in Visalia on Monday, as members of the community came together to remember the Tulare County peace officers who have died in the line of duty since the late 1800's.

"As we recognize the names on the wall, it becomes ever more saddening when you realize that the names before us that we didn't personally know, there's many on there that we personally did know," Tulare County Sheriff Mike Boudreaux said.

Both were victims of COVID-19.

"I remember when he got his badge pinned on as a deputy and just being so proud that that was my cousin," CHP Lt. Ian Holguin said.

Holguin says his cousin served his country as a member of the National Guard, and then his community, as a Tulare County Sheriff's deputy, starting with the department in 2000.

Holguin says he appreciates the support his family has received from the community since Frank's passing.

"And you saw it here today," Holguin said. "Every department's been represented here today but then you look off and you saw a bunch of people that they just wanted to come out and give their respects. That really meant a lot, not only to me but my family."

Most recently, he served as a lieutenant for the state Office of Protective Services at the Porterville Developmental Center.

She commended the law enforcement community for making many sacrifices and being willing to risk their lives to protect others.

"When an officer responds to a call, pulls someone over, knocks on a door, or enters a scene, they have no idea what scenario awaits them, and they must be ready at all times to fulfill their duty," Grove said.

That includes the threat of COVID-19, which is responsible for the two Tulare County peace officers added to the memorial wall.

Exeter Police Chief John Hall concluded the ceremony by reading their names, and their end of watch.