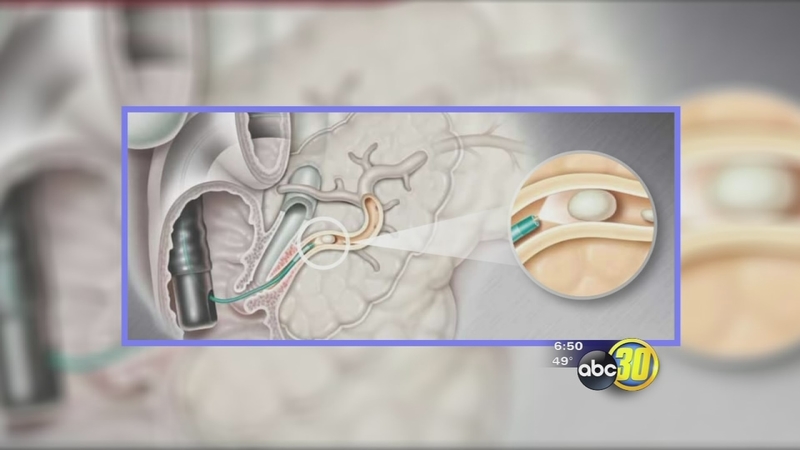 FRESNO, Calif. (KFSN) -- Spotting cancer in the bile duct has traditionally been a major feat for doctors. This is an area of the body that is buried deep within major organs, so it's hard to see what's going on. Now, a tiny camera could mean a quicker diagnosis and better treatment for patients.

Laura Davis knows a thing or two about winning family trivia games, but for the last seven years, she's been up against a different opponent -- breast cancer. "Every day, I just try to be normal, as normal as possible," Davis told Ivanhoe.

Davis has had surgery and chemo, but her cancer has come back three times. Doctors worried that her cancer might have spread to her bile duct. Typically, they've relied on X-rays or biopsies for diagnosis, which can be inaccurate and painful. Dr. Michel Kahaleh uses a new technology called SpyGlass on Davis to see what was going on.

"The concept is what you see better, you can treat better," Dr. Kahaleh, Chief of Endoscopy at New York Presbyterian, told Ivanhoe.

A fiber optic probe with a miniature camera is placed down the patient's throat and travels all the way to the bile duct. It magnifies the area and allows doctors to see cancer, benign tumors and stones in real time. "Now, we can finally see all those diseases that we were suspecting," Dr. Kahaleh said.

If cancer is present, doctors can immediately use a laser to destroy it. In a study, using SpyGlass with laser therapy more than doubled the survival rates for patients with bile duct cancer. Luckily, Davis' bile duct was clear of any cancer. Dr. Kahaleh was able to tell her the good news on the spot. "The more information you can get, the better off you are as a patient," Davis said.

Now, she can enjoy family time knowing doctors are keeping a closer eye on her cancer. "Every day that I can be strong and fight is another day with them," Davis said.