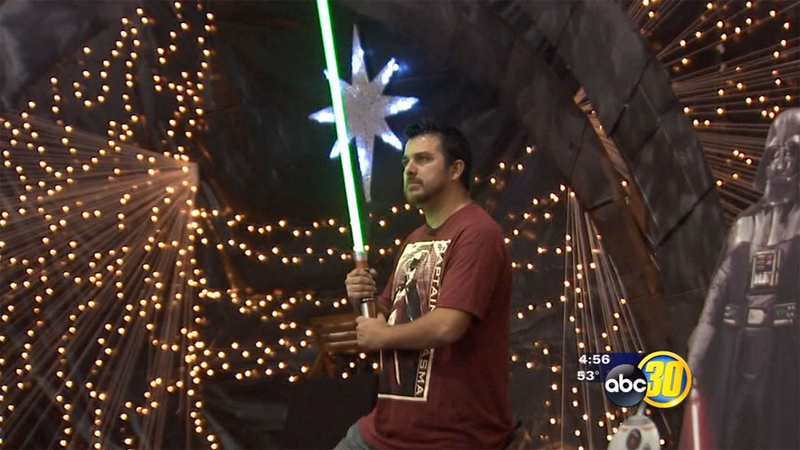 FRESNO, Calif. (KFSN) -- The wait has been excruciating for long-time Star Wars fans, but it ended Thursday night as "Star Wars: The Force Awakens" opened around the Valley.

Hard-core fans drawn to the saga as kids remain loyal fans. The force was so strong at Northside Christian Church in Clovis kids learned lessons with a Star Wars theme.The Millennium Falcon cockpit was depicted on stage. Teaching pastor Lito Solorio explained, "Back in 2010 I actually wrote a sermon called "The Faith Strikes Back."

Solorio became hooked on the good vs. evil battle as a kid. His office was full of Star Wars memorabilia including posters and signed pictures. In 2005, Lito won a fan contest and met actor Mark Hamill at a "Revenge of the Sith" premiere.

Hamill autographed his action figure. Solorio recalled, "It was surreal because I identified with Luke Skywalker as a kid. He was living this adventure. I was stuck at home. I wanted to live an adventure." His boxed collectibles will eventually go on display at home when his three kids are older and won't rip them open. "This was a good one. This is called the Darth Vader extended lightsaber."

Star Wars fans Manoah Crane and Josh Banda spent the night outside the Sierra Vista Theater in Clovis. To stay warm, they staged an epic light saber battle. Crane said, "I pride myself as being a fanboy of Star Wars and all the different things that engulfed me into the fandom."

Crane wore assorted Star Wars patches with pride. His loyalty to the saga remained fierce because the movies take him back to his childhood. Manoah said, "Some people grow up and they move on to other things but for people that are like us that are really in touch with our inner child we connect with Star Wars and it gets us through hard times even now as adults."