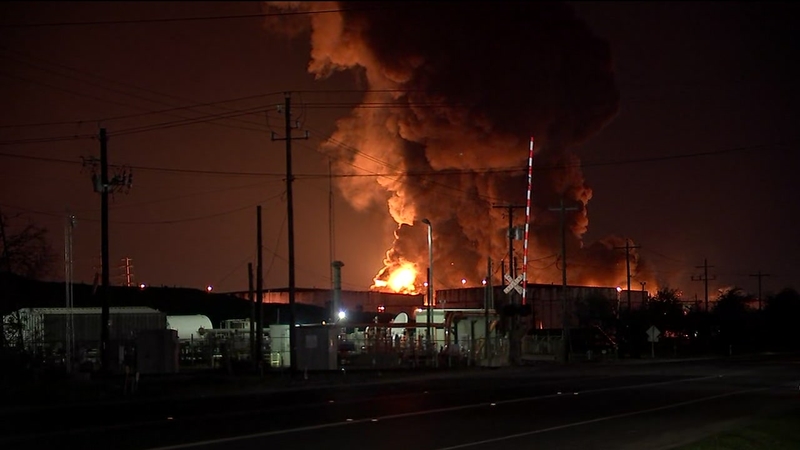 DEER PARK, Texas -- The fires at the ITC facility in Deer Park have intensified now burning eight tanks, days after the fire started.

The fire has been burning since Sunday around 10:30 a.m. It started with one tank at Intercontinental Terminals Company. Emergency responders have been working with foam and water to try and control further spreading.

Six tanks were on fire as of Monday, but ITC officials said flames spread to two empty tanks due to a temporary reduction of water pressure.

"The water pressure has been restored and responders have been able to full resume their efforts to fight the fire," officials said.

The District has received several emails and calls from parents regarding the decision to resume school tomorrow, March 19. Please see the attached report from the state regarding air quality in our area. For the full message, go to https://t.co/0VaRTMAbaG . pic.twitter.com/t5VC1q5Pdc

Meanwhile, classes resume at La Porte and Deer Park ISD after the districts canceled classes Monday. But there's mixed reaction from parents, especially since you can still see the plume of black smoke above one of the schools in Deer Park ISD.

"Kids at San Jacinto Elementary will be able to see the fire out of their school window. You're putting our kids at risk for what reason? My kids will not be in school until the fire is out," a parent wrote.

Another parent wrote on social media, "My kid will not be in class until the fire is out. My son's school is a couple of miles away. I will not gamble with his life."

The company claims testing done by independent contractor CTEH are below levels that would represent a public health concern. But not everyone is confident we're in the clear.

"By looking behind me, you can tell this is not normal, this is not fine," said Corey Williams on Monday, policy and research director for Air Alliance Houston. "The only thing preventing this from being a major catastrophe is favorable weather conditions."

RELATED: What's burning inside the tanks at the ITC facility

ITC officials say the first tank that caught fire contains NAPHTHA. The fire then spread to a second tank containing XYLENE. Both are gasoline components.

Officials said the components are in gas blend stocks used in the production of finished gasoline and base oil used for machine lubrication.

NAPHTHA can cause irritation to eyes and the respiratory system. It affects the central nervous system and is harmful and even fatal if it is swallowed.

XYLENE may also be fatal if it is swallowed and enters the airway. It can cause skin irritation.

According to the Occupational Safety and Health Administration, Toluene is used in many products and workplaces like printing operations, manufacturing facilities, construction sites and nail salons.

SEE ALSO: Health experts on big smoke plume: 'Stay inside and away'


The Deer Park Office of Emergency Management released a message on social media about a hotline people can call because of an increase of claims following the incident at ITC.

Officials said on Monday that it could take two days before crews are able to extinguish the flames.

We could see and feel the impact of the Deer Park plant fire for days and possibly weeks, experts say.