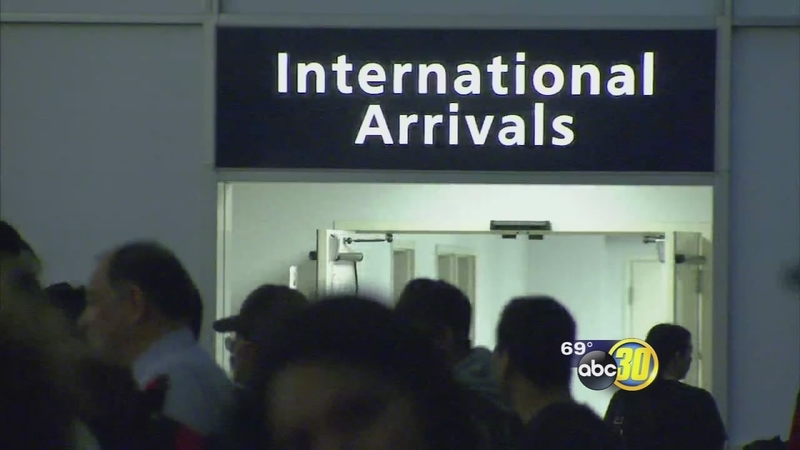 FRESNO, Calif. (KFSN) -- Surprisingly, Visalia native Rosita Marroquin and her boyfriend Bob Daily were smiling for a picture they took on the third floor of an office building in Puerto Nueva (Near Puerto Vallarta) on Friday afternoon.

They took the photo after being evacuated from their nearby hotel in preparation for Hurricane Patricia. It's the couple's first trip to Mexico. "It's been beautiful, we've had a fantastic time it's just this kind of came our way and here we are," Marroquin said.

Right around the time Patricia made landfall, the couple was told they'd be staying the night on cots with three thousand other people, most of them American and Canadian tourists. "Some people are crying, some people are laughing, wall to wall people are sitting," Marroquin said.

"It's packed but it's you know everybody's so far right now is as calm as possible," Daily, her boyfriend said.

Meanwhile Fresnan Chris Cota kept us posted all day long from his point of view at the Garza Blanca hotel in Puerto Vallarta. He had moved there from his less secure townhouse nearby. "The mood is very good, good atmosphere, people are in good spirits because they know the storm is not going to hit the heart of Puerto Vallarta," Cota said.

As night fell, Cota only saw a spattering of rain and choppy waves outside. So he returned to his room, and thinks he'll be able to return to his vacation home on Saturday.

That's also when Rosita Marroquin and Bob Daily planned to fly back to California. They're not so sure that will happen anymore, but late Friday night they got the word that they could return to their hotel rooms, as they continue to wait out the storm. "(We're) hoping to get through it," Marroquin said. "I think it's going to make us stronger, so I have faith."

Meanwhile at Fresno Yosemite International Airport tonight, there were two flights for Guadalajara, one scheduled for 11:30 p.m., the other for 1 a.m. Both were on time and appeared to be full flights. Everyone in line was familiar with Hurricane Patricia.

Some were nervous about flying into a city that will see some severe weather as a result of the storm, but most were treating this flight like any other, and using the down time to make new friends.

"I've traveled quite a bit, I'm past the whole oh man, like what if's," said Saul Rodriguez, who's traveling to Guadalajara. "But you know just gotta get on the plane and hope for the best and trust God."