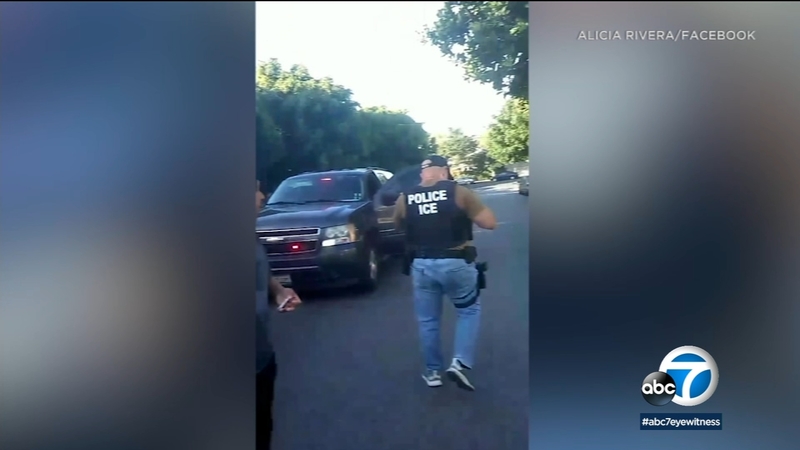 Woman records as neighbor is detained by ICE in Echo Park

ECHO PARK, LOS ANGELES -- A mother of two was taken into custody by ICE agents in the middle of the street in Echo Park. Her neighbor tried to intervene and captured the dramatic moments on video.

Alicia Rivera pulled out her cellphone when she realized her neighbor was being detained by immigration enforcement officers.

At one point, Rivera attempts to block the SUV to impede the agents from driving away with her neighbor in the back seat. Rivera repeatedly asks the officers for a warrant signed by a judge.

"I spoke to her partner early this morning and he's devastated.The two daughters are devastated," Rivera told Eyewitness News.

She's raising concerns about the unmarked cars the officers were using and the scene she said was left behind after her neighbor was pulled out of her car in Echo Park Sunday morning.

"They left the car with the emergency light on, blocking the road and they took the keys."

Immigration and Customs Enforcement (ICE) did not comment on this particular case without additional details about the woman's identity but said the following in part:

"Congress has established no process, requirement, or expectation directing ICE to seek a judicial warrant from already overburdened federal courts before taking custody of an alien on civil immigration violations. This idea is simply a figment created by those who wish to undermine immigration enforcement and excuse the ill-conceived practices of sanctuary jurisdictions that put politics before public safety."

The ACLU says when immigration agents show up at someone's door, they should not open unless there is a search or arrest warrant signed by a judge.

CHIRLA is taking on this case and an attorney with the organization said it sets an example. "Stay silent. Ask to be able to speak to an attorney or you can contact a family member who will hopefully coordinate for you to get someone to consult with you.

Immigration experts told Eyewitness News that ICE officers cannot pull over a car unless they have a reasonable suspicion the person is undocumented.