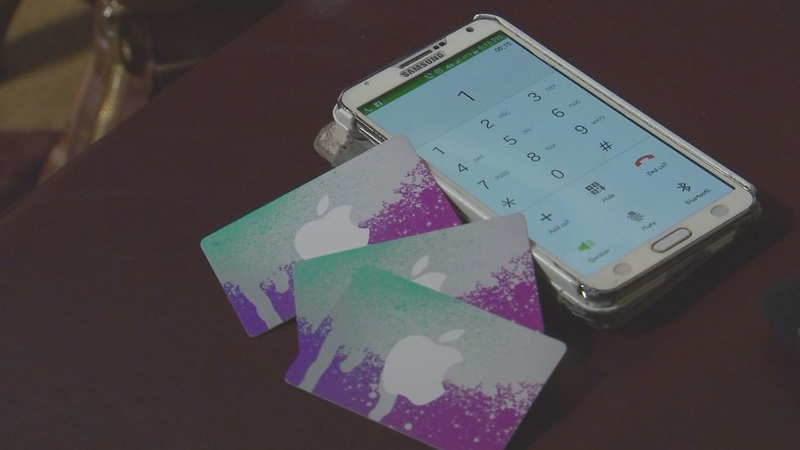 RALEIGH -- Scammers posing as the IRS are nothing new - but now they're asking for money in the form of iTunes gift cards.

Single mom Decora Martin was at work when she checked her phone and found several missed calls and voicemails from a number she did not recognize. The messages were alarming - the callers told her the IRS had mounted a lawsuit against her for money she owed.

When a call came again from the same number, Martin answered. She said the caller told her she owed the IRS $6800 and if she didn't pay the money immediately, she would be arrested.

Martin said she was in a vulnerable moment, she didn't have time to think. She was at work and she needed to pick up her son from school soon. More than anything she didn't want to be arrested. So she did what the caller said.

Martin said the caller told her she needed to go to Crabtree Valley Mall, to the Apple Store.

"I went there to the mall and he told me that the Apple Store was connected with the Department of Revenue and he told me to buy iTunes gift cards [with] 500 dollars a piece on them," she said.

She bought $1000 worth of iTunes gift cards, then she said the caller told her to go to her car and scratch off the back and read him out the numbers, which she did. She said he then required an extra $3000 fee from her for not initially telling him how much was in her bank accounts.

Still worried she might get arrested if she did not comply, Martin said she went back to the store and bought another $500 gift card. She then scratched the back of it and read the numbers to the caller, giving him a total of $1500.

Decora Martin with her son

"(The caller) was like 'do you feel better?' Like trying to play on my emotions a little bit. And I was like 'yeah, like now that I'm not going to be arrested,'" she said.

Martin said she's embarrassed after the fact that she fell for the scam, but she wants other people to be careful if the "IRS" calls them with threats demanding money. Martin said she spoke with a manager at the Apple Store to make sure they were aware that scammers are getting money from victims through the purchase of iTunes gift cards.

"Be aware of phone calls, of out of state numbers that you don't know, and to any recordings, voice recordings, to hang up. It's not real," she said.

Representatives from the IRS have said in the past that the IRS contacts people through the mail first - and they never demand money immediately or threaten to arrest or deport a person.