'He doesn't have an NBA contract yet and he's already giving back to our city... we knew that's the kind of kid he would be.'
KFSN
By Brianna Mellon 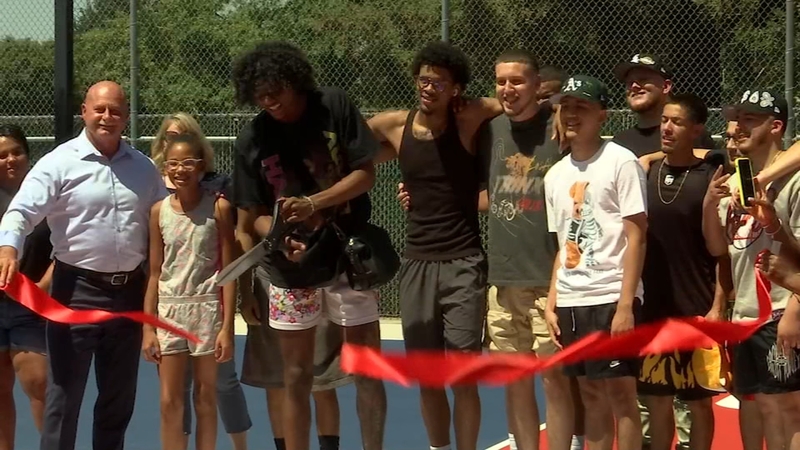 FRESNO, Calif. (KFSN) -- The NBA draft is less than two weeks away.

The first round will be aired right here on ABC30 on July 29th.

Green returned to the city that raised him on Saturday afternoon, giving back in the best way he knows how - through his love of basketball.

The former San Joaquin Memorial High player signed autographs and took pictures with fans at Koligian Park where he has completely renovated his childhood court.

"It's surreal in a way, I didn't expect to be here, I came from nothing, I wasn't even a basketball player in the beginning, it's a blessing that's all I can say," he said.

Added Mayor Dyer, who was present at the event:

"Once every so many years, and in this case every so many decades, somebody comes through your city with the athleticism that allows them to be at the top of their game."

Jalen Green was a 5-star shooting guard out of high school before choosing to join the NBA G league over playing in college. In the inaugural season for Ignite, Green averaged 17.9 points, 4.1 rebounds, and 2.8 assists per game.

Touted as one of the association's up-and-coming brightest stars, his skills were built at Koligian Park.

It's where he spent his childhood hooping with his friends.

"I live five minutes down the street, in the apartments over there. We used to come here, play football, play basketball, just to kick it. There were some epic battles down here on this court," he recalls.

Green had always envisioned putting out a court before the NBA draft. Once he signed with Adidas in May, the idea became a reality. In a partnership between Adidas, Green, Project Backboard, and the City of Fresno, the renovated court came to life.

"The fact that he doesn't have an NBA contract yet and he's already giving back to our city... we knew at Memorial that's the kind of kid he would be, very humble," said San Joaquin Memorial head basketball coach Brad Roznovsky.

"For him to do something so big at such a young age.. I would've never ever imagined this being his life."

Green broke in the newly designed court with a monster one-handed slam, a sign of what's to come in his career.

"I believe he is going to be the No.1 overall pick in the NBA, to recognize the importance of giving back to the community. A community that he believes contributed to his success. The youth that come behind him have an opportunity to enjoy and play on a basketball court that he played on."

Along with his family, former teammates at San Joaquin Memorial came out in support. Even Central grad Jaylon Johnson who now plays for the Chicago Bears said Green is like a little brother to him.

"He's just a young kid who always had ambitions to play basketball. Just being able to see where he took his talents, add hard work and staying on the right path...." Johnson said.

That path has led him to play at the highest level. In less than two weeks, the Fresno native will travel to Brooklyn, New York, for the NBA draft at the Barclay Center. The Detroit Pistons have the No. 1 overall pick.