There was no bear during Thursday's visit. Cox took questions from reporters, explaining why he wants to be governor.
KFSN
By Jessica Harrington 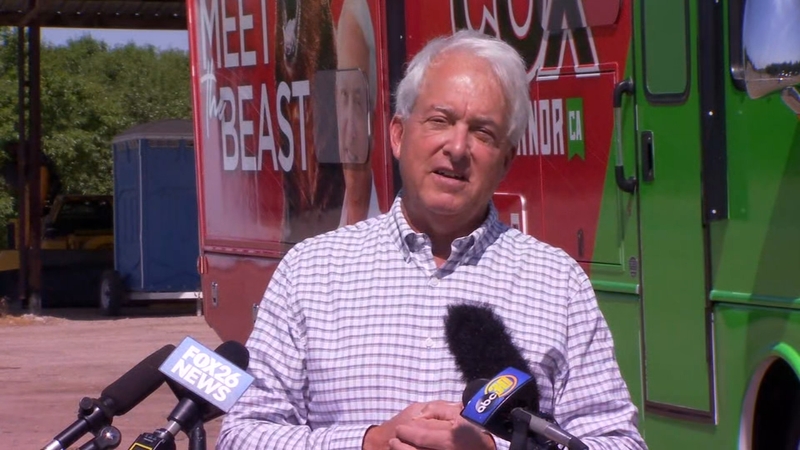 The 1,000-pound bear, Tag, who was with him in Sacramento Tuesday did not make an appearance.

Instead, he spoke at a local farm saying he has family connections to the valley and wants locals to vote for him.

"You know we've had career politicians like Mr. Faulconer. We've had celebrities like Ms. Jenner. They haven't done the job," said Cox.

Cox saying Californians have a choice between 'the beauty', Governor Gavin Newsom, or 'the beast', him.

"We've seen what 'the beauty' has done, I think it's time we unleashed 'the beast'," Cox said.

Cox said his 40 years as a businessman and previously running a statewide election sets him apart from other GOP candidates.

"I got millions of votes in 2018, so I'm the only candidate who has run statewide and has that support of millions of people and we're going to build from there," said Cox.

"We're in the period now where voters can remove their names form the list of folks that signed the petition for a recall," said political analyst and Executive Director of the Maddy Institute Mark Keppler.

Those who signed have 30 days to remove their name. If there are still enough valid signatures, it moves to the Department of Finance, which has 30 days to estimate the costs of the recall election.

Then, the Joint Legislative Budget Committee has 30 days to review and comment on the cost.

Once certified, the Lieutenant Governor is required to call a recall election which will be held no less than 60 days and no more than 80 days later.

However, exactly when the recall election will be held is still unknown.

"The process it pretty opaque it's not real clear. There's lots of "ish" words in there, so it's very difficult to tell you -- to tell anyone -- exactly when the election will be," Keppler said.

The recall ballot will have two parts.

The first question will ask if Governor Newsom should be removed from office.

The second part will give people an opportunity to vote for a candidate to replace him, should he be recalled.

Candidate votes would only be totaled if more than 50% of voters casting ballots in the recall election vote to recall Gavin Newsom.