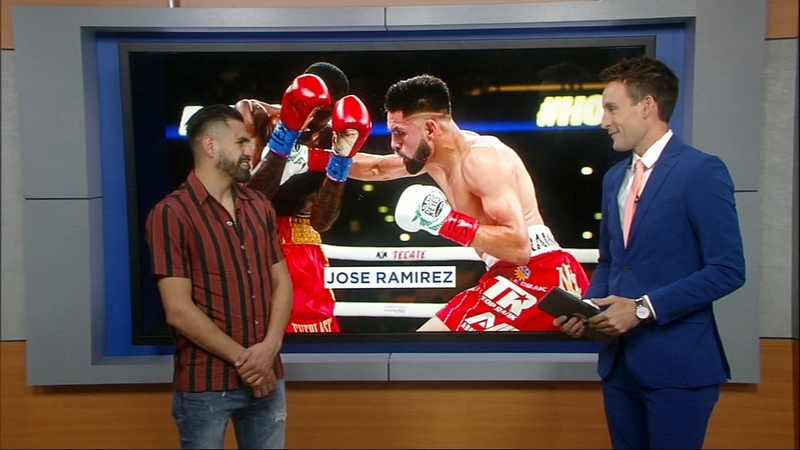 Stephen: What was that like to accomplish your dream of unifying these belts?

Ramirez: "It's definitely a dream for me. It's something that's never been done before that a guy from the Central Valley could go out there and unify world titles and it's something that puts me--I'm the sixth now current unified champion in all divisions. So now I join the names of Canelo, he's the other unified champion. Andy Reese who shocked Anthony Joshua so there's six of us in total right now currently being unified champions. It's quite an honor for me and the positive feedback I've been getting since Saturday night has been amazing."

Stephen: We're seeing some of those stills from that action. That was a 50/50 fight a lot of experts had going in...did it feel that way in the early going?

Ramirez: Maurice Hooker was a humble champion. He was an undefeated champion on his prime. He had a lot of confidence coming in as he had shocked the world by beating Flanagan in the UK and defending his title twice in the states. I knew coming in it wasn't going to be an easy fight but I was well prepared and I had all the confidence in the world...with my team and myself and I just put everything to work and put everything together."

Stephen: You are halfway now to unification--Regis Prograis, Josh Taylor hold the other two belts. You went out of your way to get this fight with Hooker. They're going to meet in that tournament...is that next on your agenda, is that the goal from here on out?

Ramirez: "Yes of course. My goal is to go out there and get all four belts and become the next undisputed world champion. That will be another accomplishment for my career. But yeah I definitely want all of those fights. I want all of the champions. I want to continue improving and being a good champion."

Stephen: I hear you have plans to auction off your fight night wardrobe--where are those proceeds going?

Ramirez: "The proceeds are going to a fighter by the name of Maksim Dadashev who passed away last week after suffering an eleventh round TKO. It's going to his family to help. He was an undefeated fighter with the same dreams as me; to become world champion. He left his family behind, I believe he left one kid close to the age of my son so...it's something that us fighters when we step in that ring we're risking our lives for our families and to also entertain the boxing world so those proceeds will be going to his family."
Report a correction or typo
Related topics:
sportsboxing
Copyright © 2022 KFSN-TV. All Rights Reserved.
BOXING
Jose Ramirez set to fight at Save Mart Center in February 2022
Meet Muhammad Ali's grandson, Nico Ali
College student dies days after fraternity charity boxing match
De la Hoya tests positive for COVID, withdraws from fight
TOP STORIES
1 killed in rollover crash in Madera County
Justices to hear challenge to race in college admissions
Tax filing season starts Monday. What to expect for 2022
Fire damages 2-story townhouse in northwest Fresno
1 severely injured in trailer fire in Winton, officials say
Driver arrested after police chase in Fresno County
Deputies searching for missing man who may have drowned
Show More
Valley firefighters sent to help battle fire in Big Sur
Loved ones grieve for Missy Hernandez at Fresno vigil
PG&E's criminal probation to end amid ongoing safety worries
Fresno's famous 'dancing teacher' appears on Ellen Show
5 tax changes that can boost your refund this year
More TOP STORIES News