Safi warned earlier in the week, his family isn't safe. Now, a cousin is dead, and his brother and another cousin are in the ICU.
KGO
By Amanda del Castillo 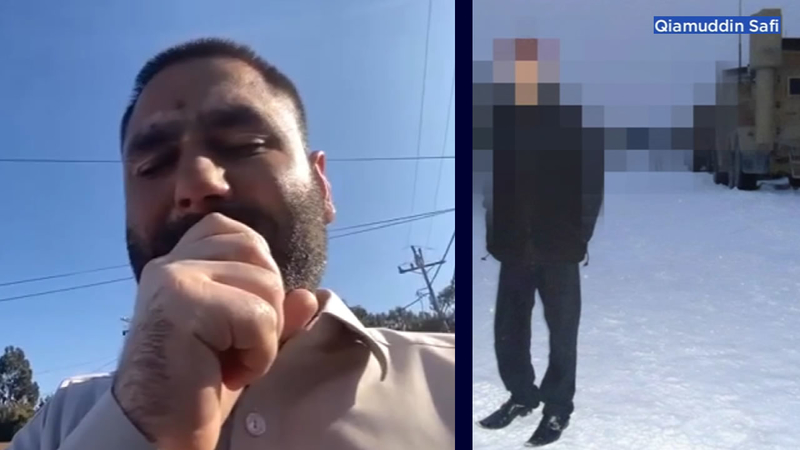 SAN LEANDRO, Calif. -- Only 72 hours after first connecting with Qiamuddin Safi, the California man who escaped Afghanistan less than one week ago, his absolute worst fear came true.

"I told you two days ago, we're not safe," Safi told our sister station KGO-TV. "My family's not safe."

Safi's brother and four cousins were at the Kabul airport on Thursday morning. According to Safi, they had their approved Special Immigration Visas (SIV) in-hand.

In video taken by Qiamuddin Safi in early August, viewers can hear the echoing sounds of unrest in Afghanistan.

"I heard the news, something can happen. I was so scared, I told my brother, 'Just be careful. If you see American, just give these documents. They can let you guys can go inside,'" he explained.

Safi said the men were in line at Abbey Gate, where one of two deadly morning blasts killed dozens. Among the dead, killed by suicide bombers, was Safi's cousin. Safi said his cousin was a longtime interpreter for the U.S. Army.

"My last conversation with him was four in the morning. He told me, 'I'm in the line,'" Safi said.

Safi said his brother and another cousin are now in the ICU. He said two other cousins are hospitalized.

"Everybody is confused. Everybody's in the hospital," Safi shared. "Half of my family is running to the hospital."

On Tuesday, KGO-TV connected with Safi, who shared pictures and videos of his escape from Afghanistan. He described his fear for the family members he left behind, including his father and extended family.

Thursday's developments have now added to the heartache being felt by the Afghan community here at home.

"We are in pain. We are hurting. We have fear," Harris Mojadedi with the Afghan Coalition told KGO-TV. "We all have loved ones back home in Afghanistan who desperately want to seek freedom and refuge. And right now, we feel like they're being held hostage."

"This is one case and indicative of so many other U.S. citizens there," said Sara Fain, an attorney with the Immigration Institute of the Bay Area. "It is not that they were on vacation and did not get the memo were going to leave the country. It was that they had to make a difficult decision. Do we leave family members to get to safety?"

Mojadedi is putting focus on those desperate to keep their families from danger. He pointed to the special distinction with this group of refugees.

"They have worked for our government. They have supported our armed services. They share the same values that you and I do," he continued. "So, it's important that we stand true to our principles of our democracy, and that we welcome them in with the warm arms and open arms and embrace them. Because they are Americans. They have fought to support our government and in the values that we have."

Mojadedi continued, "It seems like in the last 10 days, people, our community, the world finally sees the pain that we've endured."

He explained that his family came to America 40 years ago as refugees from Afghanistan.

"They were welcomed with open arms. The generosity and spirit of this country. So this is very personal to me. This is my life. This is my existence. I wouldn't be here today without the support of community members," Mojadedi told ABC7 News. "And so that's why it's so important to me to do this work. It's so important that we try to help as many people that need to evacuate Afghanistan. We need to help as many people that need to resettle here in the Bay Area, here in California."

"It's deeply personal to me, because it's my own story," he shared.

He added that even after Thursday's deadly attacks, there is still absolutely a renewed sense of activism and community. One that is being seen and felt on a local level.

"People are organizing clothes drives, they're creating food pantries. We're working with agencies across cities, counties, states. Immigration attorneys, people are coming together to rally for the resettlement of these refugees and to bring awareness to the human rights violations that have long been happening in Afghanistan," Mojadedi elaborated.

However, Safi is still looking for specialized help.

"I need help with my family. I don't want to lose anyone," Safi said. "As I say, this would be number six of my family I'm losing."

A Bay Area man is sharing his terrifying story, escaping from Afghanistan.

His family did contract work for the U.S. government, assisting with security, logistics and construction. He said these are reasons they are likely Taliban targets.

"Everyone knows. No one listened," he said about his request from help from Bay Area lawmakers. "I told them my family, they are eligible to come to the United States. Their SIV application is confirmed. Please help me."

He said on top of trying to help them escape, there is now added confusion and overwhelming grief.

His cousin who was killed in Thursday's attack was a father of two young children, with another on the way.