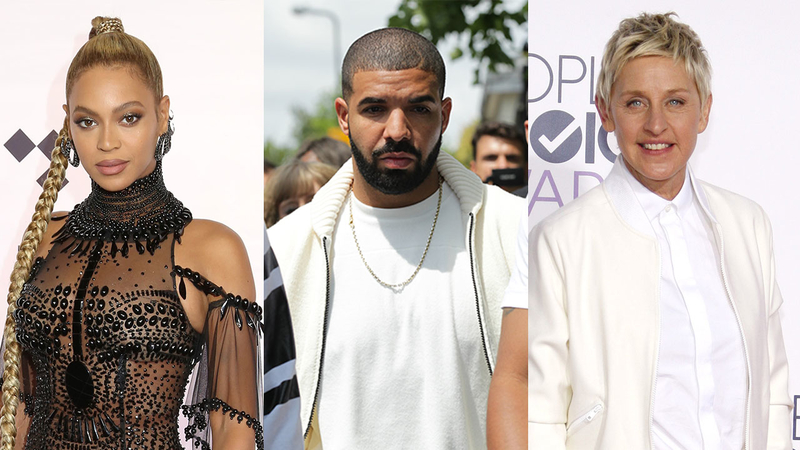 HOUSTON -- As Harvey continues to devastate the Houston area, celebrities from all over the United States are showing their support.

On Friday, The Houston Food Bank announced on Facebook that Taylor Swift had made a "sizable" donation in honor of her mother, who is a University of Houston alumna.

Texas-born actor Matthew McConaughey recorded a message encouraging people to "take a minute today and think about what you can give."

DiCaprio's charitable foundation pledged $1 million to the United Way Harvey Recovery Fund on Wednesday, according to Variety. Miley Cyrus donated $500,000 and is accepting donations for relief through her Happy Hippie Foundation.

So devastated about the crisis in my home state of Texas. Let's all help- donating here in case you can too: https://t.co/ZTrYu04jAn

Our thoughts and prayers continue to be with all of the people affected by Hurricane Harvey and with those helping them.

Praying for everyone down in Houston

Woke up still praying for #Harvey to recede. Donating to @RedCross and @SalvationArmyUS. Do whatever you can.

Thx to some amazing transportation volunteers, we sent over 70 pups to a shelter in OK today. Rigs now rolling into Houston for another load pic.twitter.com/XoQL4aJQ5I

Earlier in the week Beyonce, arguably the most famous Houston native, posted a photo showing her love and support.

Former President Obama tweeted that helping each other out is "what we do as Americans."

Thank you to all the first responders and people helping each other out. That's what we do as Americans. Here's one way you can help now. https://t.co/iGfE8rAoAu

As did former President George H.W. Bush and his wife.

Herewith a message from former President and Mrs @GeorgeHWBush to their fellow Houstonians and Texans. pic.twitter.com/XmxfZB5X4E

Coldplay and Lady Antebellum sent their regrets after cancelling their Houston shows this weekend.

Our thoughts and prayers are with everyone affected by #HurricaneHarvey. pic.twitter.com/HBihHtqUcL

Many celebrities, like Lady Gaga and Drake, are calling for people to make relief donations.

Praying for Houston what a special place. Making relief donations and sending ❤️.

Kim Kardashian West announced that her family would be donating $500,000.

Houston we are praying for you! My mom, sisters & I will be donating $500,000 to @redcross and @salvationarmyus today #HoustonStrong

George Strait, who is from San Antonio, said that he'd had family affected by the storm.

Thoughts & prayers are w/ all affected by the storm. My family & friends were personally affected in surrounding areas. God bless us all.-GS

Many more celebs also sent their best to Texas.

Texas, we are thinking about you and we love you and we're here for you. Be safe. ❤️❤️❤️❤️❤️

If you are in the path of #HurricaneHarvey, please be safe and know the whole country is thinking of you.

Heartbreaking images from Houston and throughout TX. Thinking about the brave & resilient people there & my friends at @BluejackNation

This is beyond devastating 💔truly heartbroken for my home town. #staystrong #deepintheheart 🙏🏻 pic.twitter.com/2BQUMpGQS3

To everyone in Texas. Please be careful and heed advisories. As a South Floridian, I know the power of these storms all too well. #Harvey

Oh, god. I'm praying for these people in Texas. To all of those who can afford to help the elderly and poor leave, please help them.

Praying for everyone in #HurricaneHarveys path. Be safe everyone!

Praying for #Houston. Please share to help our brothers and sisters in Texas impacted by #HurricaneHarvey. pic.twitter.com/zkJRgk5HCx

Texas, you are in my prayers. #Harvey

Flooding has forced thousands in Texas & Louisiana from their homes. Join me in supporting the @RedCross: https://t.co/MoTyKAw8bU