LAUSD strike: Teachers back in classrooms after voting to approve deal 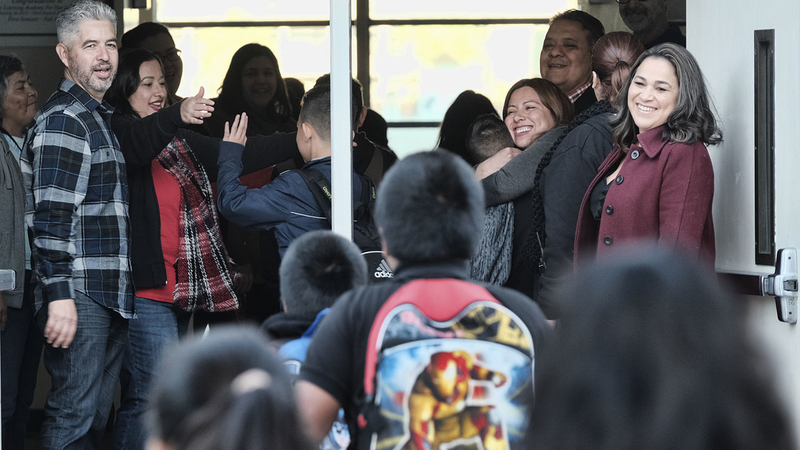 LAUSD strike: Teachers head back to school after reaching deal

LOS ANGELES -- Teachers overwhelmingly approved a new contract and returned to the classroom after a six-day strike over funding and staffing in the nation's second-largest school district.

Although all votes hadn't been counted as of Wednesday morning, preliminary figures showed that a "vast supermajority" of some 30,000 educators voted in favor of the tentative deal, "therefore ending the strike and heading back to schools tomorrow," said Alex Caputo-Pearl, president of United Teachers Los Angeles.

Mayor Eric Garcetti, accompanied by leaders of the union and the Los Angeles Unified School District, announced the agreement at City Hall a few hours after a 21-hour bargaining session ended before dawn.

"This is a good agreement. It is a historic agreement," Garcetti said.

The deal was described by officials as including a 6-percent pay hike and a commitment to reduce class sizes over four years.

Specifics provided later by the district and the union included the addition of more than 600 nursing positions over the next three school years. Additional counselors and librarians were also part of the increase in support staff.
EMBED More News Videos

Marianne O'Brien said the need for additional support staff was one of the main reasons she walked picket lines.

"This is not just for teachers. It's also for counselors, nurses, psychologists and social workers," said O'Brien, who teaches 10th grade English.

The new contract also eliminates a clause that gave the district authority over class sizes. Grades 4 through 12 would be reduced by one student during each of the next two school years and two pupils in 2021-22.

Disputes over pay, class sizes and support-staff levels in the district with 640,000 students led to its first strike in 30 years and prompted the staffing of classrooms with substitute teachers and administrators.

The district insisted that the union's demands could bankrupt the school system, which is projecting a half-billion-dollar deficit this budget year and has billions earmarked for pension payments and health coverage for retired teachers.

Superintendent Austin Beutner said he was glad the deal was reached. But he hinted that financial challenges remained.

"The issue has always been: How do we pay for it?" Beutner said. "That issue does not go away now that we have a contract. We can't solve 40 years of underinvestment in public education in just one week or just one contract."
EMBED More News Videos

Students and teachers had smiles on their faces at University High School in West Los Angeles Wednesday as educators returned to the classroom after their union reached a deal with the Los Angeles Unified School District.

Thousands of educators, many wearing red, and their supporters gathered on the steps outside City Hall after the tentative agreement was announced.

The crowd began cheering, blowing horns and chanting the initials of Caputo-Pearl as the smiling union leader emerged from the building and walked through the crowd.

Joaquin Flores, a special education teacher, said he believed he would support the deal unless it weakened health care or didn't go far enough to reduce class size.

"It's almost like metaphoric," Flores said. "The sun's out. When we started, it was all rainy and cold. I feel like it's a new day."