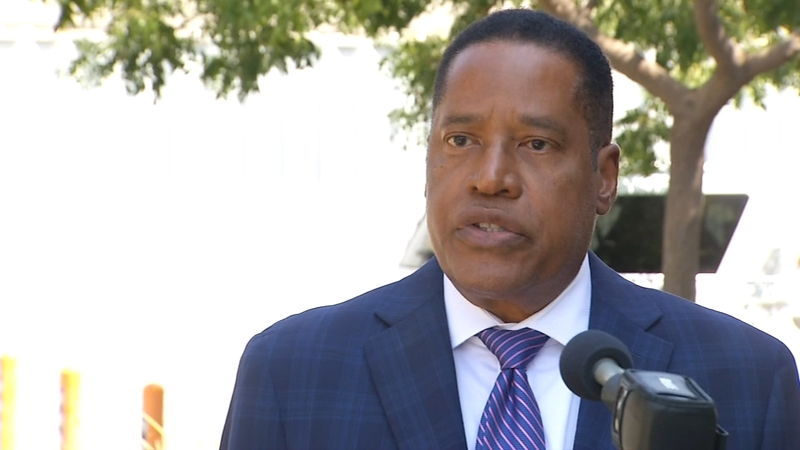 FRESNO, Calif. (KFSN) -- The Republican leading the polls in the California recall election made a campaign stop in Fresno on Sunday.

Conservative talk radio host Larry Elder shared his plans for the Central Valley and fielded tough questions about past comments that have recently come under criticism.

The Republican-led recall effort is nearing the end as mail-in ballots arrive for the September 14 special election. 46 candidates are on the ballot, including Elder.

He talked about his top priorities and what he would do as governor, hoping to win the minds and hearts of voters.

In our one-on-one with Elder we asked how he would tackle some of the key issues facing Central California.

"When I get to Sacramento, I don't drink coffee. I drink tea. But before I had my first cup of coffee to the extent that there's still face mandates and vaccination mandates, they're going to be repealed," he said.

Under Governor Gavin Newsom's administration, California is the first state in the country to require some workers be vaccinated against COVID-19 or get regular testing.

"Not only is Larry Elder, Day one, and he's proud of this, wants to eliminate the masks requirements for our kids in public schools, but he also wants to eliminate vaccine verification and take us off the same covid cliff. And while we do have a stubborn 6.1 positivity rate with this Delta, it's a third of where Texas and Florida is and I think we continue to outperform those other states," he said.

The Fresno rally comes as the 69-year-old candidate is facing scrutiny over his past comments and alleged treatment of women.

Action News asked Elder about those allegations, but he chose to focus on his campaign messages instead.

Despite California Democrats' advantage in voter registration, a new poll from CBS News/YouGov found that among Californians most likely to vote, the recall is still nearly evenly split.

On September 14, if more than 50% of the ballots cast are "no" votes, then the governor will keep his job. If it's less than that, a candidate on the ballot will take his place.