Lightning flashes across sky in parts of Central CA; bolts spark some fires

Many Central Valley residents woke up to rain falling and lightning flashing in the night sky early Friday morning.
KFSN 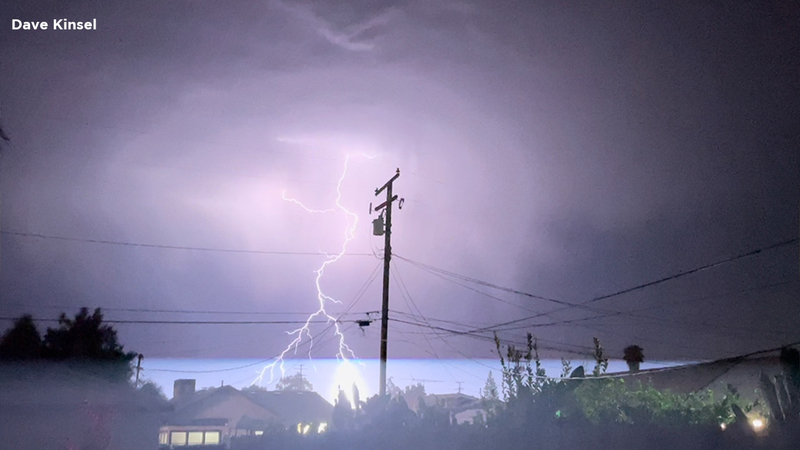 Lightning flashes across sky in parts of Central CA

FRESNO, Calif. (KFSN) -- Many Central Valley residents woke up to quite the surprise when rain started falling, and lightning lit up the night sky early Friday morning.

Residents in the South Valley also saw some storm activity.

David Kinsel shared photos of one of many lightning bolts he saw overnight in the Porterville area.

The storm also had Visalia police and firefighters responding to one neighborhood near Dorothea Avenue and Woodland Street after a tree caught fire from a lightning strike.

The tree was fully engulfed in flames between two houses when crews first arrived. Officials were able to quickly put out the blaze.

It did not appear that either house was damaged.

The Tulare County Fire Department firefighters responded to multiple fires caused by dry lightning, officials said Friday morning. Officials say the fires were located in areas belonging to the state and the Sequoia National Forest in the southern portion of Tulare County.

Fire crews say no homes were threatened by the flames in the Springville Community or the Montgomery Ranch area.

PG&E reported numerous outages within and near the foothills. Some Southern California Edison customers also lost power near Lake Success.

It wasn't immediately clear if the outages were related to the storm. Crews have not said when power would be restored.

The storm comes as California faces an intense heat wave with temperatures reaching triple-digits across the state. A Flex Alert has been issued for Friday.