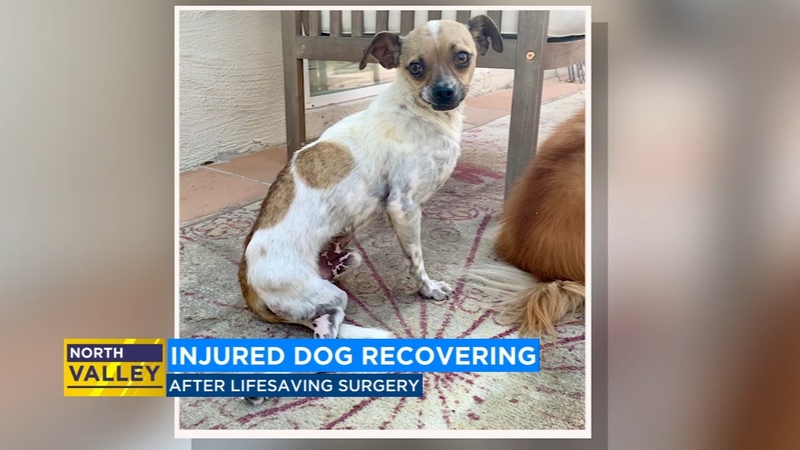 FRESNO, Calif. (KFSN) -- A small dog who captured the hearts of many ABC30 viewers is now on the road to recovery.

Aaron had two broken legs when he was rescued by New Beginnings for Merced County Animals last month.

Veterinarians believe he was hit by a car about a year ago and never received care.

His hind leg was twisted entirely backward, and the bone in his front leg was close to breaking through the skin.

Supporters donated thousands of dollars so that Aaron could have a second chance at life, instead of being euthanized.

Aaron's back leg is completely twisted and unusable, and one of his front legs was also broken. Veterinarians believe he was hit by a car about a year ago

The surgeon hoped to save his front paw, but there was so much damage that both of the broken legs had to be amputated last week.

However, rescuers say it's not slowing Aaron down.

"He's doing amazingly well, and the vet thinks since he's pretty much been using two legs that he'll be fine with two legs and nothing else will need to be done," said Sharon Lohman.

"I think it really saved a wonderful little dog. He's going to have a great life. I, like Sharon, am just so grateful for everyone who has contributed, for the way the community came together from all over," said Lisa Yeo.

Aaron will continue recovering with his foster family for a few more weeks before he's adopted into a forever home.