Tree falls on man's car in Merced while he's still inside 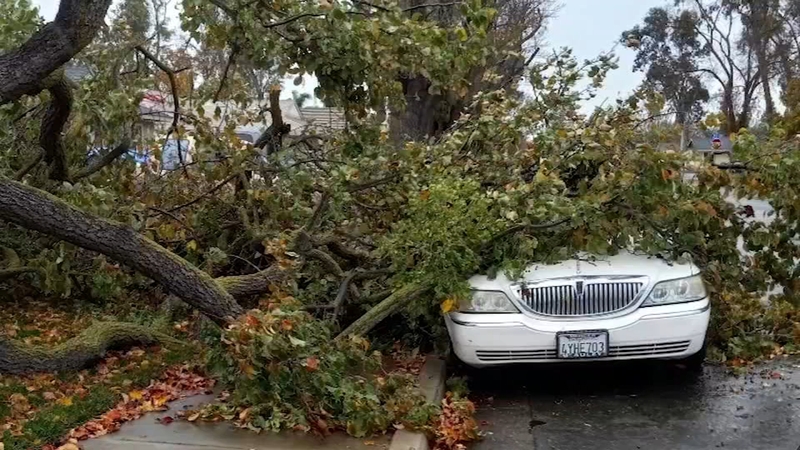 Tree falls on man's car in Merced while he's still inside

MERCED, Calif. (KFSN) -- The tree came crashing down on Christian Campos' car as soon as he pulled up to his Merced home. He was about to step outside the door.

"It was crazy and everybody comes out, my family comes out thinking I was hurt but I'm okay," he said.

Crews arrived 20 minutes later to start cutting up the tree and clear his front yard on Donna Drive near Veterans Boulevard.

"Everything's fine," he said. "It's just kind of surprising. I had just called the city about two hours prior to complain about the tree because I noticed the tree was dying."

Despite his very close call, Christian insists it was no big deal.

"I didn't even jump," he said. "I just heard a thud and I looked out. I've been through so much stuff, nothing phases me at this point in my life."

The small number of incidents may be linked to a windy storm last month which kept workers busy.

"Because of the previous storm that we had in October, we've been actively removing trees and removing limbs," says Public Works Manager Juan Olmos.

Workers prepared for the incoming rain by clearing leaves and debris away from street gutters so they wouldn't clog storm drains.

A slow and steady rain was welcome because it was easier to keep an eye on potential issues.

"Due to the efforts of the crews going out with the leaf collection, we haven't seen many areas where there have been any flooding issues," says Public Works Storm Drain Supervisor Joe Padilla.