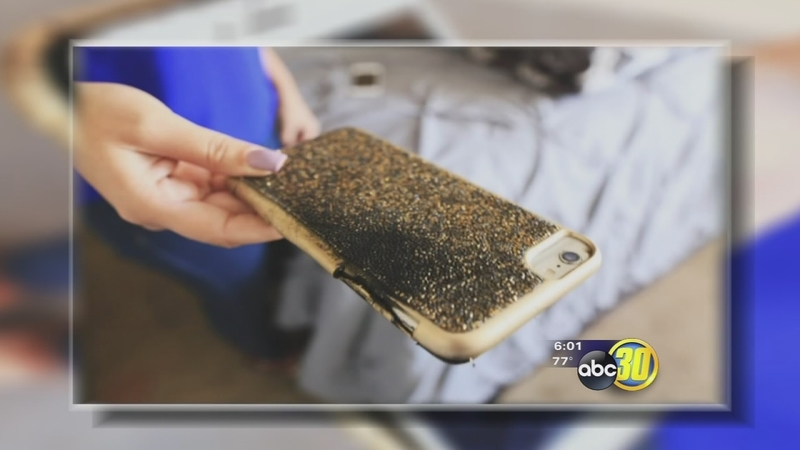 FRESNO, Calif. (KFSN) -- For Yvette Estrada, it was a harsh wake-up call after she says a flash followed by flames jolted her out of bed. It was caused by her iPhone 6 plus that was charging on the dresser.

"I heard a sizzling, then we heard the pop and the whole fire was coming out of the screen."

Estrada said the explosion started a small fire and her husband put it out by throwing the phone in a sink.

By the time firefighters showed up, which was around 3:00 a.m., there was just ash, debris, and a melted phone.

Estrada said it got so hot it damaged the dresser, a pair of glasses, and two apple watch stands.

"What if this would have been underneath my pillow or if I was on the phone? My face would be burned."

This is the second iPhone explosion in a week. The first was reported by a student, Darin Hlavaty, on the east coast. He said the same model started burning in his back pocket before it blew up.

"Right as class was starting, my phone started smoking in my pocket. It was a fire."

Samsung had similar problems with the nNote 7 recently which prompted a nationwide recall.

As for the iPhones, Apple said it's looking into both cases.

Estrada said she only had her phone for three months and Fresno Fire believes it was faulty.

"Hopefully they can fix this and they can compensate my new phone or do something for me because they have to do right," said Estrada.

Estrada said the worst part of all this is not the phone, it's replaceable, she said it is the pictures on it. The memories of her kids and a recent promotion are all lost and they were not backed up.

Estrada has talked with Apple said the company offered her a new stand for her watch, a charger, and a free replacement for the six plus-- however, if she wants to upgrade to a seven, she would have to pay for it.
Related topics:
fresnoexplosioniphonefresno
Copyright © 2021 KFSN-TV. All Rights Reserved.
FRESNO