More than 800 people were out protesting loudly but peacefully, hoping they won't be forced to join the United Farmworkers Union.
KFSN 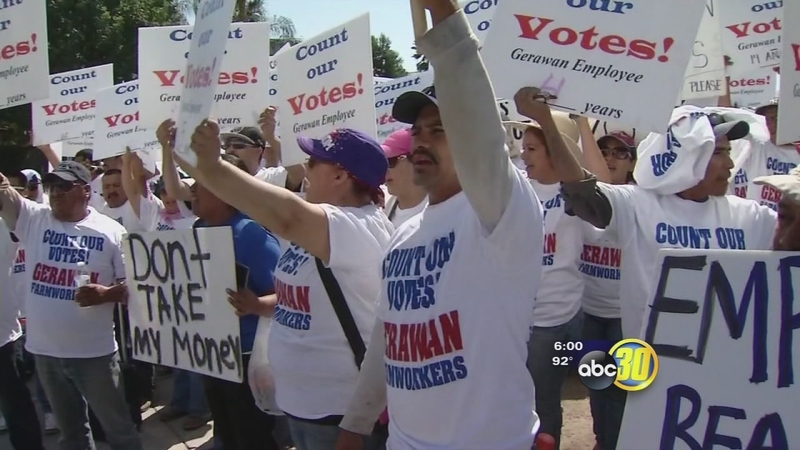 VISALIA, Calif. (KFSN) -- Chanting passionately, hundreds of workers employed by Gerawan Farming headed to the front gates of the Visalia office of the Agriculture Labor Relations Board (ALRB) on Tuesday. Their goal is to decertify their contract with the United Farm Workers of America. The farmworkers say they don't want to lose wages to the union and they're happy working for Gerawan without the union's help.

"The employer, the company it always respects us like fieldworkers, like humans," said Sylvia Lopez, a farmworker. "They have our benefits, they have discounts, we have bonus. We have everything; it's perfect."

The farmworkers are protesting because last November they took a vote to decertify their contract with the UFW. The ballots were handed off to the ALRB, which has yet to count them.

"All they want is their votes counted, and they want Governor Jerry Brown -- who established the ALRB - to just simply count their votes. That's all they want," said Jesse Rojas, a farmworker rights activist.

An attorney with the ALRB says they can't count those votes yet, saying they believe Gerawan Farming coerced and paid the field workers into the decertification.

"It's not as simple as counting the ballots; we cannot count the ballots until the evidence is heard at a hearing before a judge. And after that hearing the board -- the ARLB -- will decide whether the election stands," said Arcelia Hurtado, attorney for the ALRB.

A judge in Fresno will hear this issue on September 29. He'll decide whether Gerawan Farming violated the law or if the farmworkers' decertification vote will count.