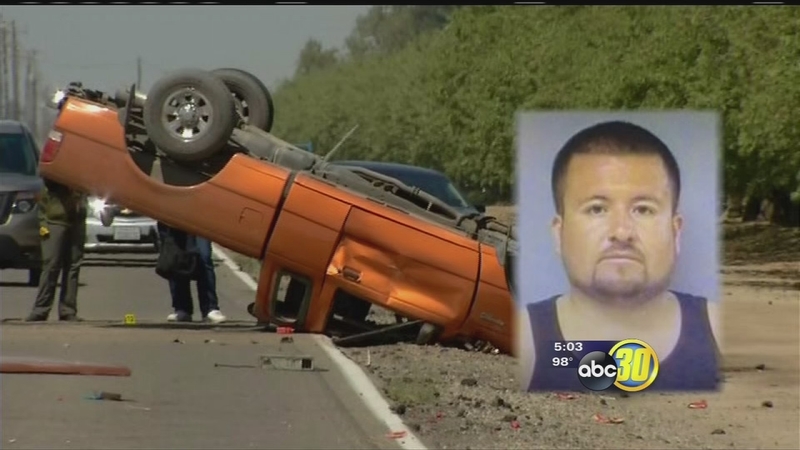 FRESNO, California (KFSN) -- Tense moments Thursday morning for law enforcement in Madera County as deputies searched for a shooting suspect. Deputies said Albaro Molina, 26, shot a woman from his car, then crashed into her car. It happened along Avenue 7, near roads 24 and 25.

His was truck-mangled, making you wonder how Molina managed to get up and run away. Moments before, Madera County Sheriff's officials said he shot a woman from his car along avenue seven.

"It appears that the people in the two different cars got into some kind of fight and shots were fired. The suspect vehicle ended up colliding with the other vehicle and then into a power pole,' said Commander Bill Ward, Madera County Sheriff's Office.

The investigation revealed that the woman who was shot was Molina's sister, but sheriff's officials do not believe she was the intended target. They say the argument was over relationship issues.

After he ran, law enforcement started looking for him. The Sheriff's office said they received help from other agencies, allowing them to secure a strong perimeter.

Just after 10 a.m. deputies found Molina hiding in an orchard. Later they found a handgun in his truck. They said he was from La Vina, about five minutes from the crime scene.

At La Vina Market, the managers know just about everyone who lives nearby, including Molina.

"I was pretty shocked to hear that cause I've known the guy he comes in here often. He's always buying his stuff from over here," said Ali Sharhan, La Vina Market manager.

Both vehicles were eventually towed away. The condition of the truck was telling of the tense situation that unfolded in a normally quiet part of Madera County.

The woman who was shot is recovering at a hospital in Fresno and is expected to make a full recovery. The sheriff's office will be interviewing the driver of the car she was in to get more details about what happened.
Related topics:
manhuntshootingmadera county
Copyright © 2021 KFSN-TV. All Rights Reserved.
MADERA COUNTY
Looking back at the ups and downs of COVID in Central CA
Wildfire burning in Madera County 100% contained: CAL FIRE
Do Valley law enforcement agencies reflect diversity of their communities?
Merced and Madera Counties remain in the red tier
TOP STORIES
Large vegetation fire breaks out near Auberry
Tulare man meets daughter for first time after 53 years
City of Fresno working to help residents struggling to pay rent
CA power grid declares Flex Alert for Thursday
PG&E crews preparing for increase in electricity demand
Punishment for 'mastermind' closes book on stealing from the dead scandal
Hot weather forces cancellations of Central Valley events
Show More
1 shot in SE Fresno while trying to stop assault
Local cattle ranchers seeing increase in hay prices
President Biden meets 1-on-1 with Russian President Putin
Merced teacher back home after battle with COVID-19
50K Six Flags tickets announced as new vaccine incentive
More TOP STORIES News