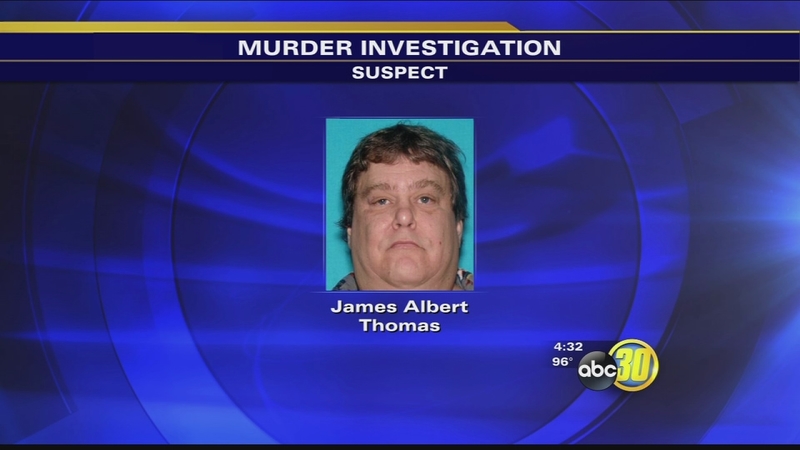 FRESNO, Calif. (KFSN) -- Fresno Police arrested James Albert Thomas, the son of an 80-year-old murder victim, on Wednesday night. The woman was discovered dead in her home in Central Fresno by a granddaughter who was coming to check on her.

Neighbors said trouble had been brewing at this house for several days, and in fact, Fresno Police were called to the house Tuesday night to get the woman's son to leave. In a strange development, his motorcycle was found abandoned along Highway 41 after her body was discovered in the house early Wednesday morning. Thomas was arrested on Wednesday night when he returned to his mother's home.

"A granddaughter came to the house," Lt. Joe Gomez with the Fresno Police Department said. "Grandmother lives here, she's 80, and she came to check on her grandma in the morning and to find her grandmother had been killed."

Gomez said the woman appeared to have died as the result of being hit with something in the upper body.
EMBED More News Videos

Neighbors told Action News the woman's son, 50-year-old James Albert Thomas, rode a loud motorcycle and had been staying there off and on for about a year. Police detained Thomas at the scene later in the day and are calling him person of interest. He was formally arrested on Wednesday night.

One neighbor described him as loud and strange. Arguments were frequently heard at the house, and last night police were called to remove the man from the home.

"We had been out here last night regarding him also," the neighbor said." My understanding he had lived here but she was trying to keep him away from the house."
Related topics:
fresno centralfresno highhomicide investigationhomicidefresno
Copyright © 2022 KFSN-TV. All Rights Reserved.
FRESNO
Mayor Dyer plans to add more officers to Fresno Police Department
Armed men rob 2 Fresno grocery stores within an hour, police say
Where to see holiday lights in Fresno and Clovis
Where to see holiday lights in Fresno and Clovis
TOP STORIES
Fire damages 2-story townhouse in northwest Fresno
Driver arrested after police chase in Fresno County
Valley firefighters sent to help battle fire in Big Sur
Loved ones grieve for Missy Hernandez at Fresno vigil
Tax filing season starts Monday. What to expect for 2022
Fresno's famous 'dancing teacher' appears on Ellen Show
5 tax changes that can boost your refund this year
Show More
Woman finds $3M lottery prize in her spam folder
Fresno Mathnasium sees demand for math tutoring amid pandemic
Man hospitalized after shooting in northwest Fresno
Suspect opens fire at birthday party full of teenagers in Clovis
Fauci optimistic omicron will peak in February
More TOP STORIES News