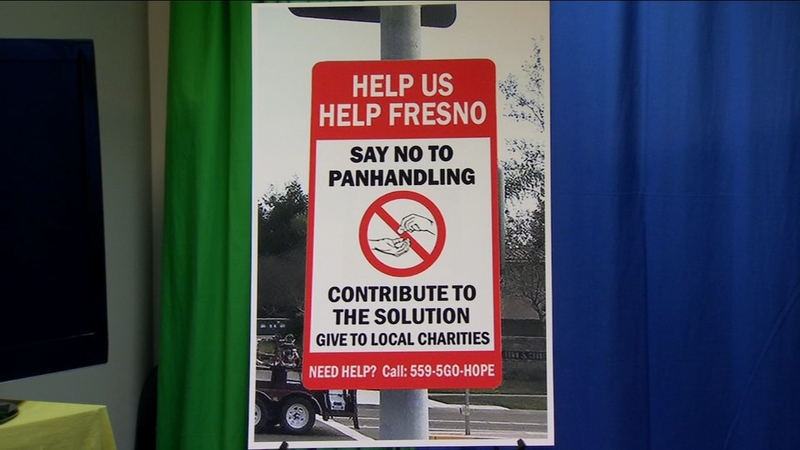 FRESNO, Calif. (KFSN) -- Signs discouraging folks from giving money to panhandlers will not appear on Fresno street corners just yet, but they could be posted at local businesses.

"Call my office and we will help them with putting out signs on their private property to address this problem," said Councilmember Garry Bredefeld.

Mayor Lee Brand joins Bredefeld in pushing the signs, trying to get the message out not to give to panhandlers.

The signs will cost business owners from $60 to $65. Homeless advocate and community journalist Desiree Martinez scoffed at the idea.

"That's ridiculous. $60 a sign, I can find $60 to do something better with than to buy a sign to prevent people from asking for help or being a loving city," she said.

The vacant seat will be filled in a special election. Bredefeld brought four candidates for the position to his news conference. Each said they would support his plan, which would cost $20,000.

"That, come August or November when the election is over, there will be a fourth vote, a majority to move the 'Help us Help Fresno' initiative citywide," Bredefeld said.
The council members who voted against Bredefeld's sign ordinance said they simply wanted more time to study the idea and consider other options.

Miguel Arias, one of the council members who opposed the sign ordinance told Action News he was not opposed to signs but said other design options in perhaps different languages should be considered.

Desiree Martinez, who was barred by the city from attending the news conference, said she didn't think signs would make any difference.

The signs would discourage giving money to panhandlers and would encourage donating to charities.