Northern California photographer followed 40 miles before being robbed at gunpoint 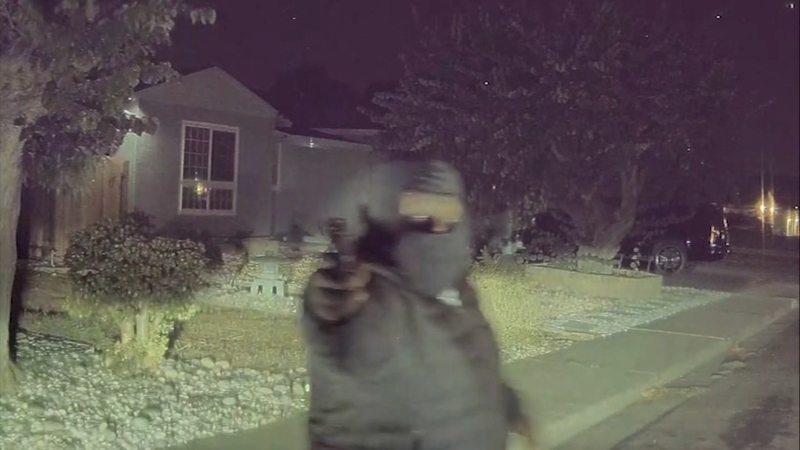 SAN FRANCISCO -- A northern California hobby photographer is sharing his terrifying story after he was followed all the way from San Francisco to Fremont and robbed at gunpoint.

The ensuing chase and involvement from his family is caught in stunning clarity on surveillance cameras. It's now prompting calls for the camera industry to make safety changes from the photography community.

Stunning landscapes are Louis's specialty. The photographer's portfolio shows glowing images from not only around the Bay Area, but across the country at national parks.

"Everybody knows how crazy I am about taking pictures of the fog!" says Louis, who requested we refer to him only by his first name.

In late September, his passion for fog led him to photograph the Golden Gate Bridge with a friend. But the day ended at his home in Fremont in the scariest twenty seconds of his life.

"It was over before I could have a rational thought," says Louis from his Fremont home, which he shares with his mother, uncle and other family members.

Despite noticing two men, looking at him and his friend at the bridge, he didn't think much of it. Neither he or his friend realized the men followed them as Louis dropped his friend off in Union City.

It wasn't until Louis pulled into his own driveway in Fremont, more than 40 miles from San Francisco, that things took a dramatic turn.

Captured in remarkable detail on his Tesla and home surveillance cameras, you can see a man approach Louis's car.

When Louis honked as a warning... "I hear a big smash at the back of the windshield," he explained.

In high-definition, one man can be seen stealing a camera bag. A second man with a gun, is not far behind. Louis says his "fight or flight" instincts kicked into high gear.

Unsure what to do next, Louis floored his Tesla over cinder blocks, chasing after the suspects who took off in a getaway vehicle. Shocked by the commotion, Louis' mom and several family members sprinted out the front door, screaming.

"My mom is completely petrified," Louis says of that moment.

Tesla cameras show Louis crashing into the getaway car, ripping off the car's bumper, and then a terrifying sight.

"The guy has a gun pointing in my face. He walks around my car and that's when I hear the gunshot go off."

You can even see Louis' brother, jump for cover.

When asked if in hindsight he would have chased after them, Louis gives a vehement "no".

Chelsea and Tony Northrup teach photography and review cameras for their YouTube channel, which boasts more than 1.5 million followers. They've spoken out after a number of similar crimes in recent years. They say thefts happen across the world. But after learning what happened to Louis?

"This was the straw that broke the camel's back," says Chelsea, Zooming with ABC7 from her and Tony's home in Connecticut. She continues to say they've been aware of the crimes targeting photographers for years.

In response, the Northrups and photography community launched this petition asking camera manufacturers to add more protections to their gear such as passcodes, GPS tracking and remote disabling.

"This technology is in our phones. We use it every day. Why can't they put it in a camera? This a priority for us, we want to feel safe and for our camera gear to be safe, Chelsea said. A sentiment echoed by Tony and Jeff Lewis. Lewis leads a Bay Area photography group providing photographers updates on shooting conditions at https://www.escaype.com , who drafted the original version of the petition launched Monday, November 1.

Fremont Police say photographers are targeted all too often. But the tremendous amount of surveillance helped them arrest one of two suspects in the case Daron McClinton, who left his shoe behind on the getaway car's busted bumper. McClinton was out on probation for other crimes targeting photographers in San Francisco.

Louis isn't sure if he'll ever pick up a camera again.

"If your hobby endangers your family, you start having second thoughts."