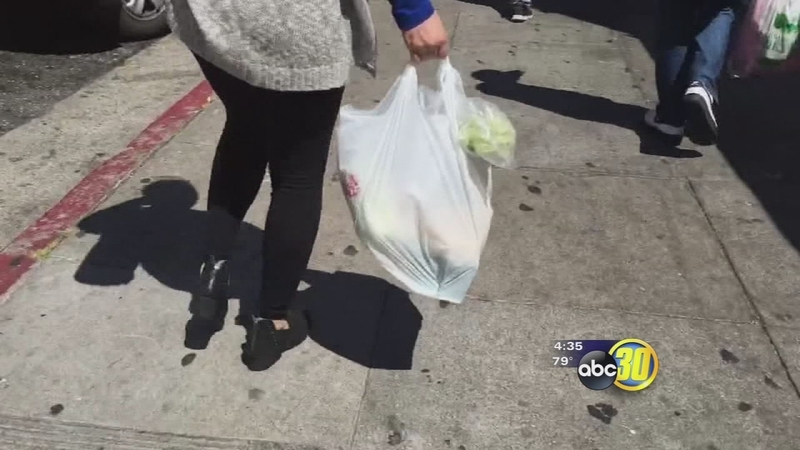 But a bag manufacturing group challenged the ban before it could go into law by collecting signatures and next month voters will decide whether to uphold it.

Proposition 67 would make California the first state in the nation to ban plastic bags. The ban would apply to most grocery stores, convenience stores, large pharmacies, and liquor stores.

Environmentalists argue that plastic bags contribute to a litter problem and clog the state's waterways while endangering animals. They are urging voters to support prop 67 and shop with re-useable bags

"We might use that bag for the 10 minutes it takes to get the groceries from the store to our home. That bag can persist as pollution to the environment for decades to come," said Mark Murray, Californians Against Waste.

The Central Valley is one of the few major markets in the state to still allow plastic bags. If prop 67 passes, stores would be allowed to sell recycled paper bags and re-usable bags but would have to charge customers at least 10 cents.

The plastic bag industry says their product is being unfairly targeted

"Anywhere litter has been studied plastic retail bags come in at around one percent or less. So the idea that you're meaningfully going to reduce litter is simply false," said Jon Berrier, American Progressive Bag Alliance.

There's also a second choice on the ballot-- deciding where the bag fees should go. Proposition 65 would give the proceeds from a 10 cent bag fee to environmental projects.

"It simply gives the voters a chance to separate these issues of bans and fees and weigh in directly on the fee question and that's why it's polling so well. We're confident voters will approve it when November 8th comes and goes," said Murray.