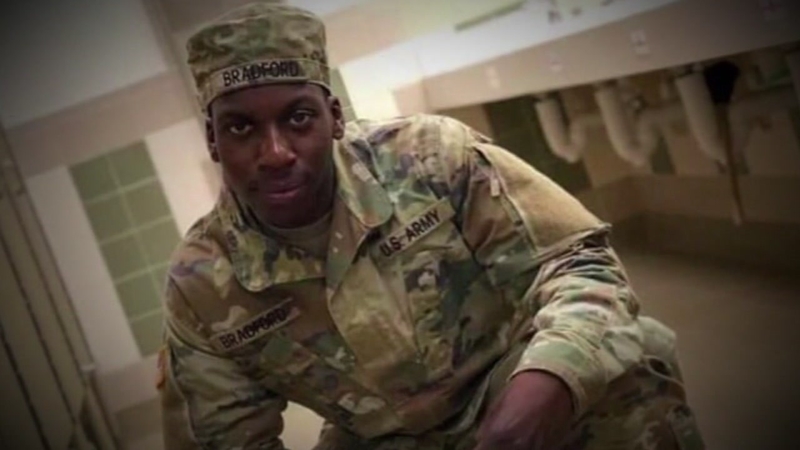 HOOVER, Alabama -- Police in Alabama promised transparency Monday after a weekend of protests in response to an officer fatally shooting a black man who pulled out his legally permitted weapon following gunfire at a shopping mall.

Hoover Police initially described the officer as "heroic" for bringing down Emantic "EJ" Bradford Jr. after two people were wounded at the Riverchase Galleria mall outside Birmingham Thanksgiving night. Then they retracted the statement, saying it's "unlikely" Bradford was involved.

Bradford's father said his son was a 21-year-old Army veteran with a permit to carry a weapon. The statement police released early Monday suggested Bradford shouldn't have pulled it out.

"We can say with certainty Mr. Bradford brandished a gun during the seconds following the gunshots, which instantly heightened the sense of threat to approaching police officers responding to the chaotic scene," the statement from the city of Hoover and its police department says.

"We extend sympathy to the family of Emantic J. Bradford of Hueytown, who was shot and killed during Hoover Police efforts to secure the scene in the seconds following the original altercation and shooting. The loss of human life is a tragedy under any circumstances," the statement said.

"We don't trust the police department because they've already lied to them. They released his picture all over the world saying he was the shooter and the police officer was a hero," Crump said.

Crump said several witnesses have reached out to the family saying the officer shot Bradford "within milliseconds," without saying a word to him.

"It doesn't matter if you're a good guy with a gun, if you're black the police shoot and kill you and ask questions later," Crump said.