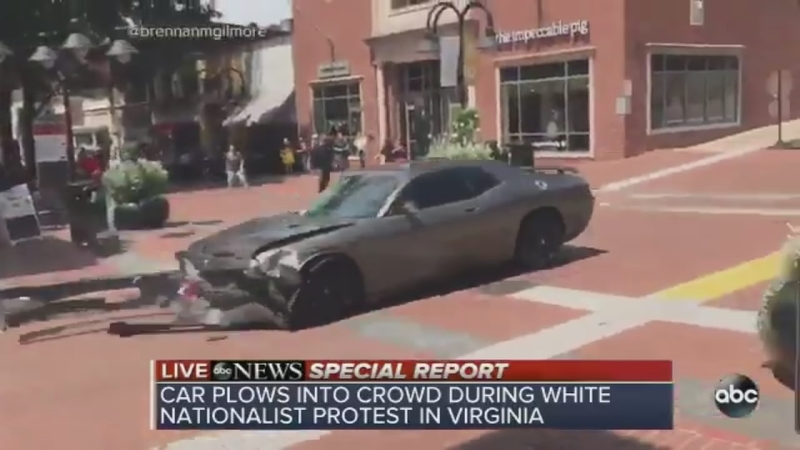 CHARLOTTESVILLE, Va. -- A car plowed into a crowd of people peacefully protesting a white nationalist rally Saturday in a Virginia college town, killing one person, hurting at least two dozen more and ratcheting up tension in an increasingly violent confrontation.

A helicopter crash that killed the pilot and a passenger later in the afternoon outside Charlottesville also was linked to the rally by State Police, though officials did not elaborate on how the crash was connected.

Authorities say a vehicle plowed into a group of people marching peacefully through downtown Charlottesville.

State official says the driver of the car is in custody.

The organizer of a rally that drew hundreds of white nationalists and other extremists to Charlottesville says he disavows the violence that eroded it.

Video of car hitting anti-racist protestors. Let there be no confusion: this was deliberate terrorism. My prayers with victims. Stay home. pic.twitter.com/MUOZs71Pf4

The nationalists were holding the rally to protest plans by the city of Charlottesville to remove a statue of Confederate Gen. Robert E. Lee.

There were several hundred protesters marching in a long line when the car drove into a group of them.

President Donald Trump tweeted about the violence that erupted amid the white supremacist march.

President Donald Trump is blaming "many sides" for the violent clashes between white supremacists and counter-protesters in Virginia. His remarks have brought reactions from Republicans as well as Democrats.

A Republican senator from Colorado, Cory Gardner, tweeted "Mr. President - we must call evil by its name. These were white supremacists and this was domestic terrorism."

Another Republican, Florida Sen. Marco Rubio, wrote: "Nothing patriotic about #Nazis,the #KKK or #WhiteSupremacists It's the direct opposite of what #America seeks to be."

The father of Trump's press secretary, former Arkansas Gov. Mike Huckabee, posted that white supremacy is the "worst kind of racism-it's EVIL and perversion of God's truth to ever think our Creator values some above others."

Trump condemned "this egregious display of hatred, bigotry and violence on many sides."

We ALL must be united & condemn all that hate stands for. There is no place for this kind of violence in America. Lets come together as one!

Deepest condolences to the families & fellow officers of the VA State Police who died today. You're all among the best this nation produces.

The demonstrations began Friday in Charlottesville with white nationalists marching through town and while carrying lit torches. The demonstrators then clashed with counter-protesters.

Some of the white nationalists cited Trump's victory as validation for their beliefs.

The White House was silent for hours about the clashes except for a solitary tweet from First Lady Melania Trump. The president has received previous criticism for being slow to condemn acts of hate done in his name.

The organizer of a white nationalist rally in Charlottesville is encouraging attendees to leave town after authorities declared an unlawful assembly and police ordered people to disperse.

Kessler told The Associated Press Saturday that he and other people who were going to speak at the event evacuated with security when police issued the order to disperse.

He says he wants rally attendees to leave town peacefully.

Richard Spencer is a prominent alt-right activist who was scheduled to speak. He says he's also encouraging people to go home.

First Lady Melania Trump is calling for peace after violent clashes broke out at a white nationalist rally in Charlottesville.

Our country encourages freedom of speech, but let's communicate w/o hate in our hearts. No good comes from violence. #Charlottesville

Trump said Saturday on Twitter: "Our country encourages freedom of speech, but let's communicate w/o hate in our hearts. No good comes from violence."

It's the latest confrontation in the city since it voted to remove a statue of Confederate Gen. Robert E. Lee from a downtown park.

The NHL's Detroit Red Wings released a statement denouncing the use of their logo at the white nationalist rally in Charlottesville, Virginia, and saying they are considering legal action to stop it.

The team says it "vehemently" disagrees with and is not associated with the event. The Red Wings add they are "exploring every possible legal action as it pertains to the misuse of our logo in this disturbing demonstration."


A Michigan-based white nationalist group called the Detroit Right Wings uses the Red Wings' logo. The organization posted on its Twitter account that members had arrived in Charlottesville.

Virginia's governor has declared a state of emergency in response to a white nationalist rally that is expected to draw up to 6,000 people.

Gov. Terry McAuliffe said via his Twitter account on Saturday morning that the declaration was made in order "to aid state response to violence" at the rally in Charlottesville, about 100 miles outside of Washington, D.C.

It's the latest confrontation in the city since it voted earlier this year to remove a statue of Confederate Gen. Robert E. Lee from a downtown park.
EMBED More News Videos

The city's manager also declared a local emergency and police ordered people to disperse from the area around the statue after several violent clashes broke out.

Hundreds of people are facing off in Charlottesville ahead of a white nationalist rally planned in the Virginia city's downtown.

Right-wing blogger Jason Kessler planned what he called a "pro-white" rally to protest Charlottesville's decision to remove a statue of Confederate General Robert E. Lee from a city park. Thousands of people are expected to pack the area.

There were also fights Friday night when hundreds of white nationalists marched through the University of Virginia campus carrying torches.

A university spokesman said one person was arrested and several people were injured.