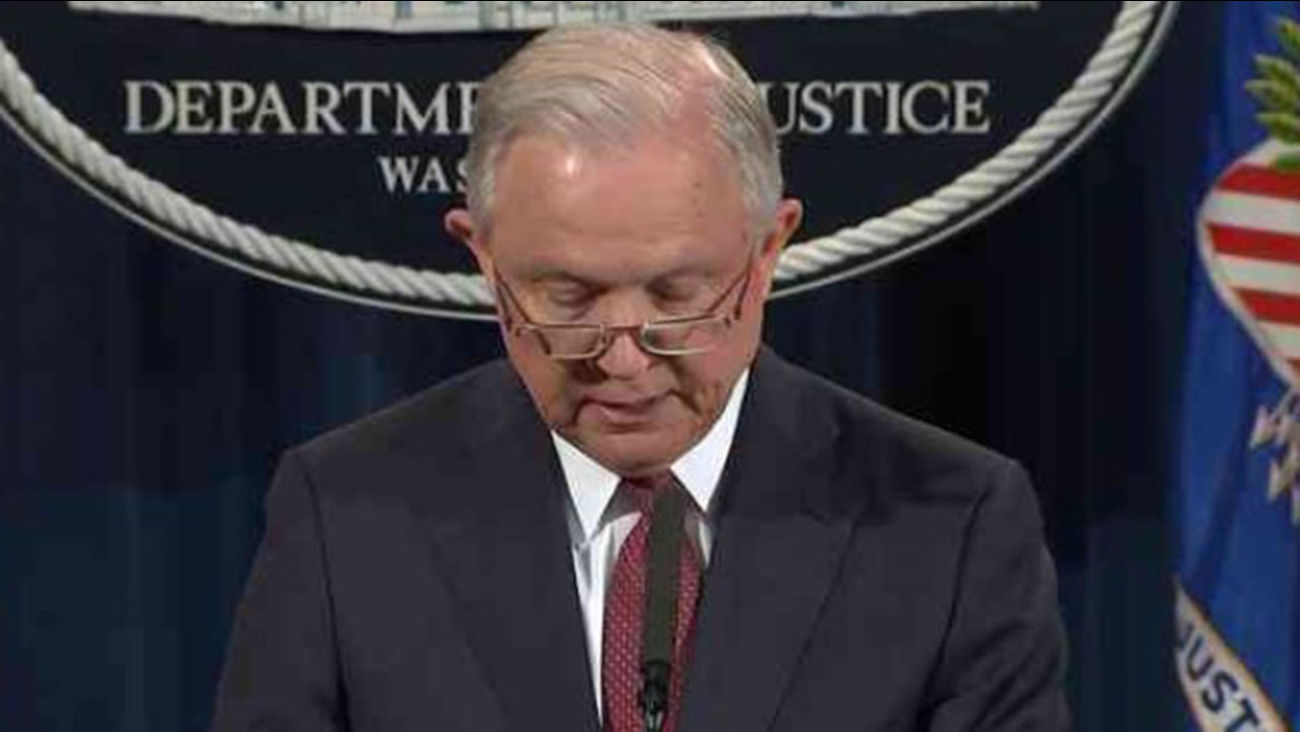 WASHINGTON -- President Donald Trump's administration will "wind down" a program protecting hundreds of thousands of young immigrants who were brought into the country illegally as children, Attorney General Jeff Sessions declared Tuesday, calling the Obama administration's program "an unconstitutional exercise of authority."

The government will stop processing new applications under President Barack Obama's Deferred Action for Childhood Arrivals, or DACA, program, which has provided nearly 800,000 young immigrants a reprieve from deportation and the ability to work legally in the U.S.

But the administration is giving Congress six months to come up with a legislative fix before the government stops renewing permits for people already covered by the program.

"Societies where the rule of law is treasured are societies that tend to flourish and succeed," Sessions said.

Trump suggested in an earlier tweet that it would be up to Congress to ultimately decide the fate of those now protected by the program. He tweeted, "Congress, get ready to do your job - DACA!"

"Make no mistake, we are going to put the interest of AMERICAN CITIZENS FIRST!" Trump added in a second, retweeted message. "The forgotten men & women will no longer be forgotten."

Sessions' announcement came the same day as a deadline set by a group of Republican state officials who said they would challenge DACA in court unless the Trump administration rescinded the program.

Many believe the program would not hold up in court.

Trump's plan to take a harder line on young immigrants unless Congress intervenes threatens to emphasize deep divisions among Republicans who have long struggled with the issue, with one conservative warning of a potential "civil war" within the party. Congressional Republicans have a long history of being unable to act on immigration because of those divisions.

Trump has spent months wrestling with what to do with DACA, which he slammed during his campaign as illegal "amnesty." Many of his closest advisers, including Sessions, policy adviser Stephen Miller, and former chief strategist Steve Bannon argue that the program is unconstitutional and have urged Trump to follow through on his campaign promise to end it.

But Trump has repeatedly expressed sympathy for the young people protected by the program, describing the decision as one of the most difficult he's had to grapple with as president.

"I think the Dreamers are terrific," Trump said last week, using a term popularized by supporters of the program, which was created in 2012 as a stopgap as the Obama administration pushed unsuccessfully for a broader immigration overhaul in Congress.

All the while, his administration has continued to issue new permits and extensions to immigrants who qualify.

But his approach - essentially kicking the can down the road and letting Congress deal with it- is fraught with uncertainty and political perils that amount, according to one vocal opponent, to "Republican suicide."

Still other Republicans say they are ready to take the issue on.

"If President Trump makes this decision, we will work to find a legislative solution to their dilemma," said Republican Sen. Lindsay Graham.

The Obama administration created the DACA program in 2012 as a stopgap as it pushed unsuccessfully for a broader immigration overhaul in Congress. Many Republicans say they opposed the program on the grounds that it was executive overreach.

House Speaker Paul Ryan and a handful of other Republicans urged Trump last week to hold off on scrapping DACA to give lawmakers time to come up with a legislative fix.

But Congress has repeatedly tried - and failed - to come together on immigration overhaul legislation, and it remains uncertain whether the House would succeed in passing anything on the divisive topic.

One bill addressing the issue that has received the most attention, introduced by Sens. Graham, R-S.C., and Dick Durbin, D-Ill., would grant permanent legal status to more than 1 million young people who arrived in the United States before they turned 18, passed security checks and met other criteria, including enrolling in college, joining the military or finding jobs.

It's unclear, however, whether the president would throw his support behind that or any other existing legislation. He could encourage the writing of a new bill - tied, perhaps, to funding for his promised border wall or other concessions like a reduction in legal immigration levels.

But it's unclear how much political capital the president would want to put on the line given his base's strong opposition to illegal immigration, his campaign rhetoric blasting DACA as illegal "amnesty" and his reluctance to campaign hard for other priorities, like health care overhaul.

Trump's expected move has sparked protests, phone banks, letter-writing campaigns and other efforts across the country urging him not to act.

Obama has kept a low profile since Trump took office, but said during his final press conference as president that he would speak out if Trump threatened "kids who have grown up here and for all practical purposes are American kids, and send them someplace else, when they love this country."

"They are our kids' friends and their classmates, and are now entering into community colleges or in some cases serving in our military," he said, adding that the: "notion that we would just arbitrarily or because of politics punish those kids, when they didn't do anything wrong themselves, I think would be something that would merit me speaking out."