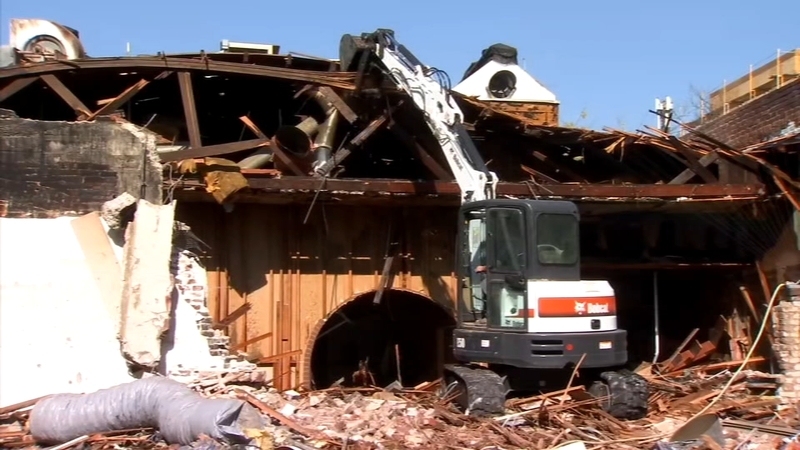 MERCED, Calif. (KFSN) -- The claw of an excavator began pulling apart a piece of Merced's history on Wednesday morning to make way for new opportunities.

The brick building has stood on Main Street since the 1940s and was home to Reinero's Italian restaurant and bar for the majority of its existence.

Mayor Mike Murphy says, "I have memories of being in Reinero's in the trophy room where you've got the trophy heads up on the wall and the clam chowder that was so well known and the food and ambiance."

But in 2016, the building suffered structural damage during a fire that gutted the Asian market next door.

The owners of that business were later arrested on arson charges.

RELATED: 2 accused of burning their business down appear in court

Meanwhile, the old Reinero's restaurant sat empty for years before the City of Merced made the decision to pay for its demolition.

Merced City Council Member Matthew Serratto serves on the downtown neighborhood committee. He says, "It's sad to see it come down, but due some of the damage, the safety issues, it wasn't useful anymore in its current state. We have to replace it, and we're going to do that."

Local leaders hope the space will be soon be filled with a new tenant that will complement other major projects happening in downtown, including the complete renovation of the old El Capitan Hotel, Tioga Apartments, and Mainzer Theatre.

The City is also digging up Main Street itself to replace the road and the infrastructure underneath.

Mayor Murphy says, "The bottom line is the future is bright in downtown Merced. There's public investment happening but also private sector investment happening. That's really what it takes is a partnership between those two. Those are all moving forward in a way we really haven't seen in the past so it's very encouraging."

Action News spoke with one of the owners of Five Ten Bistro, which is just down the street at Main and Canal.

He says they are in the process of trying to purchase the property so they can build their own restaurant instead of leasing their current space, but there are still some details that need to be worked out for that to happen.

The owner of the property right next door where the Asian market burned down says he would also like to develop his space now that the damaged wall he once shared with the Reinero's building is coming down.