'You could feel the heat': How embers at a Fresno recycling center sparked a 60-acre fire 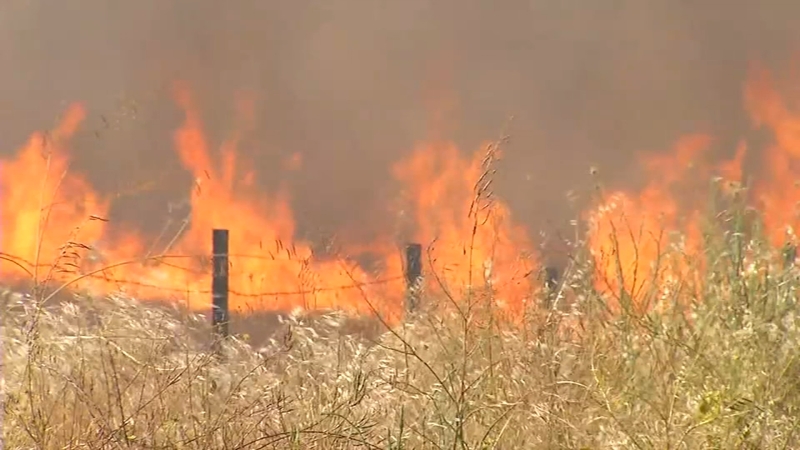 FRESNO, Calif. (KFSN) -- As flames tore through the Republic Services Rice Road Recyclery and Transfer Station, Eutimio Torres and Sergio Romo saw smoke billowing from the building. The pair were finishing a haul when the unthinkable happened.

Torres says, "As we get to the scale we turn around and fire is engulfed inside the building and you see the wind just blowing through all the embers trash just flying out of there."

The pair considered going back to look for anyone who may be trapped but saw emergency crews arriving and wanted to stay out of the way.

Romo says, "You could feel the heat from the fire and we were kinda downwind from it so we had to get out of there. We looked around, we just see the trash flying around on fire."

What they didn't see, embers from the fire were igniting nearby dry grass.

CAL FIRE Battalion Chief Dan Urias says, "The winds were just so severe it's called ember cast, once one little ember gets pushed back into a receptive fuel-bed that's where the fire happens."

25 mile per hour winds sent flames across 62 acres toward and along Friant.

City crews from Fresno and Clovis aided in the firefight and drove neighborhoods to protect homes that were threatened.

Drone video captured by ABC30 insider Brennan Noriega shows an active fire at the recycling center after crews were able to douse the grass fire flames.

In a statement to Action News, Republic Services says they're thankful for the quick response from fire crews and that there were no injuries.

Something Battalion Chief Urias says almost wasn't the case as he noticed dozens of people along the trails trying to get a glimpse of the flames, which moved quickly towards them.

Urias adds, "In events like that, stay away from the area and use the media outlets to get the news that you need and help us do our job by staying out of the area."

Thank you for reaching out. We are thankful that there were no injuries in the recent fire at our Rice Road Recyclery and Transfer Station and grateful for the quick response from local fire departments. The cause of the fire is under investigation and we are cooperating with local authorities to determine the fire's origin
Report a correction or typo
Related topics:
fresnofresno northeastfirefresnocal fire
Copyright © 2021 KFSN-TV. All Rights Reserved.
TOP STORIES
KNP Complex Fire: More evacuation warnings issued in Tulare Co.
Fresno teen's life and death words in murder case
When to expect decision on COVID-19 vaccine boosters
Despite CA's lower COVID case rate, Valley has high transmission
Suspects to stand trial in 1996 Kristin Smart disappearance
Police: Man shoots estranged wife to death in Clovis, injures 1
19-yr-old arrested for murder of man in wheelchair, Fresno police say
Show More
Search resumes for Brian Laundrie in Gabby Petito case
Fresno developer files lawsuit against city, councilmember
California struggles to conserve water amid historic drought
Fresno County considers offering money to fully vaccinated employees
Brazil's health minister tests positive for COVID at U.N.
More TOP STORIES News