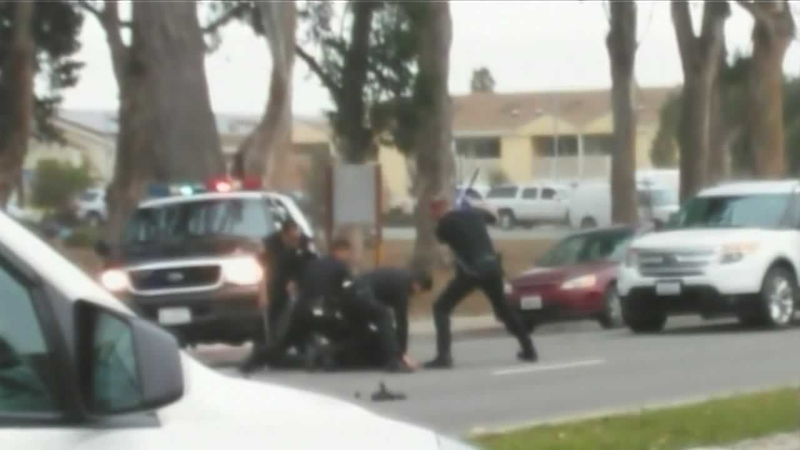 SALINAS, Calif. -- Salinas police released new details about the man who was beaten by officers with batons. The incident was videotaped by a bystander.

Blood tests confirm the suspect was under the influence of methamphetamine and he suffers from a psychotic disorder. Critics continue to say officers used excessive force.

Salinas police recognize they are facing distrust in the community.

A small protest was going on outside while the Salinas police chief was telling reporters inside he has asked the Monterey County District Attorney to conduct an investigation into whether the five officers engaged in criminal use of force against 28-year old Jose Velasco. Video from Friday evening shows officers repeatedly striking Velasco with their batons.

Velasco appeared in court yesterday on crutches. He has a fractured leg and bruises to the arms and legs.

"People watch what is a minute and 30 second video and assume they know what happened," said Salinas Police Chief Kelly McMillin. "And they don't. That's just the reality."

Police released 911 tapes of what witnesses saw Velasco doing, causing officers to intervene with force to arrest him. "Oh my God. He threw her down. He's throwing her into traffic," said a caller.

That caller and others said Velasco threw a woman in traffic. It was his mother, who called 911 for help. The line was open as officers arrived. In the recording his mother screams and Velasco moans from the baton blows.

McMillin has reviewed the incident. One officer has been taken off the street, the other four remain on patrol.

In the meantime, the Velasco family met Thursday with Oakland attorney John Burris. The family would not speak.

"To me it's an excessive use of force and a clear violation of his civil rights," Burris said.