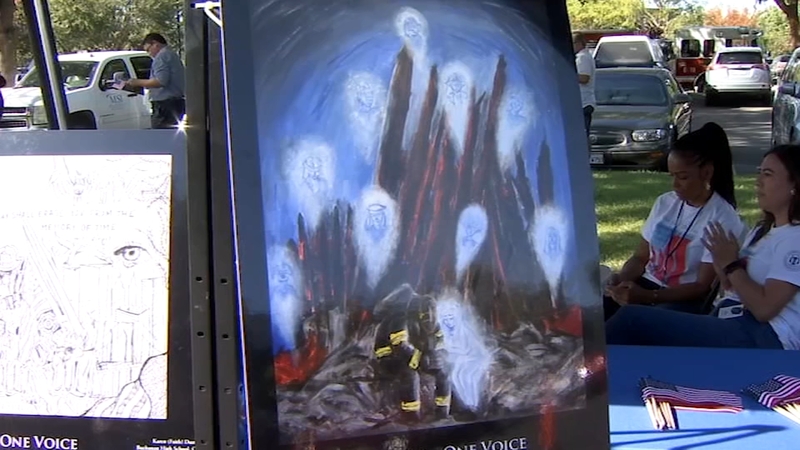 FRESNO, Calif. (KFSN) -- A moment in history captured through the eyes of Fresno County students, all of them were not yet alive to see the tragedy. But their understanding of the 9/11 attacks is clear through each stroke on these paintings.

The Roosevelt High School senior Sarah Delgado says she did a lot of research in preparation for her piece. She saw countless images with smoke coming out of the Twin Towers.

That inspired her to create something different on her canvas.

"What I have is butterflies replacing the smoke and I wanted to capture a different perspective to let people have hope," Delgado said.

Grace Vang is a sophomore at Roosevelt. Her painting shows a firefighter weeping next to a soul that is comforting him.

Vang said she painted additional souls to represent the many people who attempted to save others.

"In some of the souls you can see normal people there when it happened and you can also see firefighters and police officers," she said.

Both students are among several finalists who were selected out of hundreds of applicants.

Fresno County Superintendent Jim Yovino says the goal of the competition was to help students capture the emotion of that day.

"We also want them to understand what happened on 9/12 and that was an America that turned into a country all for one it didn't matter race religion it was about coming together," Yovino said.

Vang was announced the winner of the contest for a painting she says was not only educational but emotional.