Bucks take compliments from Warriors, then completely overwhelm them 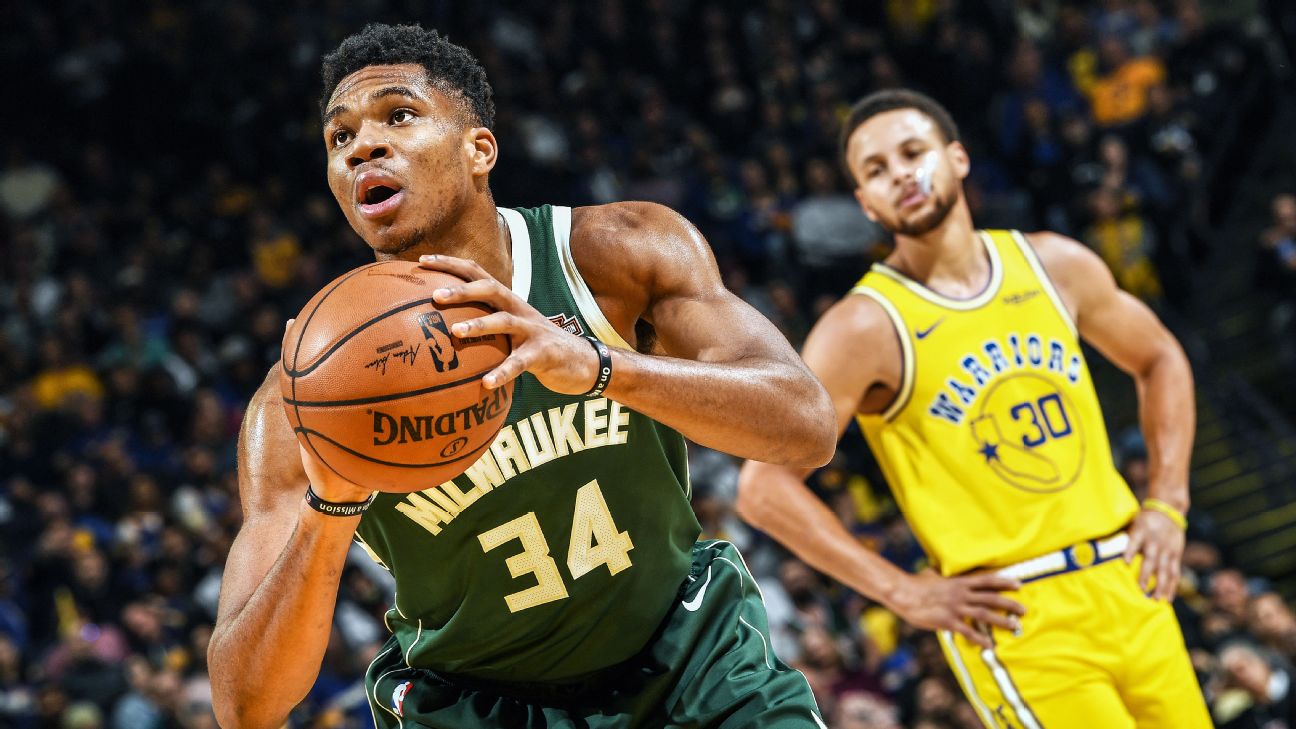 OAKLAND, Calif. -- Stephen Curry called his shot long before he stepped foot on the Oracle Arena floor Thursday night. Prior to a deflating 134-111 loss to the Milwaukee Bucks, one that Curry exited early because of a left adductor strain, he spent some of his post-practice time Wednesday afternoon discussing the state of the new-look Bucks -- the team that has earned the attention of the league throughout the first few weeks of the season.

"I think [their situation] is very similar to four years ago here," Curry explained. "A change of scenery sometimes helps. You get a little boost of energy, a little shift in focus and perspective, and that little difference can unlock something. It's still early. They're taking care of business like they should. It's important when you have that much potential to get off to a good start, but the season will shape out as it's supposed to."

Curry, the two-time NBA MVP, knows from experience just how much a coaching change and some roster tweaking can do for a young team on the rise. Four years ago, Steve Kerr was tapped to replace Mark Jackson as head coach of the Golden State Warriors, reconstructing what would become one of the league's most prolific offenses in the process.

This summer, the Bucks tapped Mike Budenholzerto replace interim head coach Joe Prunty, who took over for Jason Kidd midway through last season. Budenholzer, like Kerr, was brought in to make the Bucks' offense get up and go to a different beat than Prunty or Kidd could.

While the Bucks are cautious about the optimism that comes with a 9-2 start, the reality that they had just walked into the defending champions' home and knocked them out brought a wave of excitement this team was searching for when general manager Jon Horst made Budenholzer the new coach months ago.

"I think teams are starting to take notice and realize we're not the Bucks that we were when I first got here six years ago," Bucks small forward Khris Middleton said. "We're a totally different team even from last year."

The Bucks are a different team because they have a different mindset within Budenholzer's system. They trust where they're supposed to be on the floor and trust that the ball will find the open man. That belief was on full display on Thursday as the Bucks got open looks up and down the floor against the big, bad Warriors (albeit without defensive stalwart power forward Draymond Green) and played without fear within the framework of an offensive renaissance that they have invested in.

Several players gave credit to Budenholzer's game plan, while veteran Eric Bledsoe noted that transition was the biggest key for the group.

To put in perspective just how dominant the Bucks' performance was in Oakland, consider that Milwaukee outscored the Warriors 84-34 in the paint. That was Golden State's worst such differential in the Kerr era, according to research by ESPN Stats and Information. The 134 points that the Warriors gave up were the second most that a Kerr-led team has allowed -- and the most an opponent has scored at Oracle Arena in a non-overtime game since thePhoenix Sunsdropped 154 on the Warriors in 2009.

"It's huge," Bucks shooting guard Malcolm Brogdon said of the victory. "It's huge for our confidence. I think it sends a message around the league, but regardless, I think we have to continue to play hard every night and play on both ends."

But how have things changed so much for a group that has many of the same key pieces alongside Giannis Antetokounmpo and Middleton? Aside from the veteran contributions of Brook Lopez and Ersan Ilyasova, the difference is that the Bucks are shooting 3-pointers at a much higher rate than under the Kidd regime. Their 44.0 percent 3-point frequency this season trails only the Houston Rockets at 47.5 percent.

"I think it surprises people," Brogdon admitted. "Bud allows us to shoot them with confidence, so we're making a lot more and it adds a totally different dimension for us."

Is that the biggest difference between this year's group and last year's version?

"I wouldn't say that's the biggest difference," Brogdon said. "I would say we have a lot of structure now. We have multiple sets we can get into, we have -- just more of a foundation to play off of rather than just freestyle."

The ease by which the Bucks enjoy playing in Budenholzer's system is evident in the way they play. There is a happy, free-flowing nature within the group on the floor that wasn't there last season. They believe in themselves, and they trust the system Budenholzer is putting into place. While Kidd's name was never mentioned, it's not tough to read between the lines and know the Bucks are enjoying the fresh start that comes with a new lead voice.

"We're trying to improve night in, night out," Lopez said. "We'll be hopefully a way better team in April and May than we are now. We were definitely pretty good tonight, and we'd like to continue to be that way, especially defensively."

On top of the adjustment to Budenholzer, the Bucks also have Antetokounmpo to lead on the floor when necessary. As the system and players around him develops, the young Greek star is taking his game to new heights. He scored 24 points in 26 minutes on Thursday night, and he continues to get more comfortable on the floor. It remains to be seen whether the Bucks can challenge the Toronto Raptors andBoston Celticsfor Eastern Conference supremacy this season, but as long as Antetokounmpo continues to grow in Budenholzer's system, they will always have a fighting chance.

"It changes a little bit," Antetokounmpo said of gaining more respect. "Day by day. We just got to keep playing better. That's it. And we got to bring it every night, because at the end of the day, that's what it's all about -- winning."

Thursday night's performance offered yet another reminder for the rest of the league about just how dangerous the Bucks can be when all their players are firing in the same direction. It was the Bucks who ended Golden State's 24-game winning streak to start the 2015-16 season at the Bradley Center. On Thursday, it was the Bucks who knocked off the Warriors on their own floor, simultaneously taking the lead for best point differential.

Middleton, in his sixth season with the Bucks, feels things are different this time. 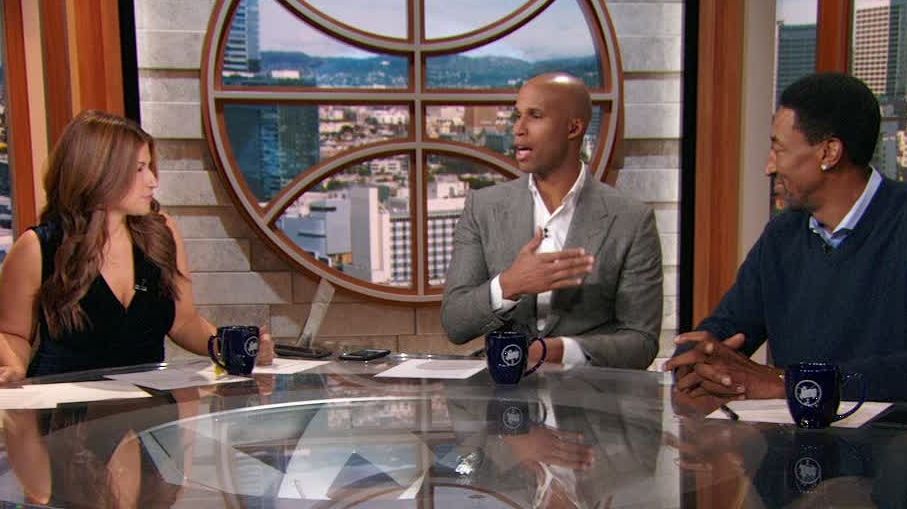 Jefferson: Warriors won't remember Bucks loss in a week
Richard Jefferson agrees with Scottie Pippen that the Bucks' win vs. the Warriors is big for them, but says it's insignificant to Golden State.

Giannis drops Looney, throws down powerful dunk
Giannis Antetokounmpo powers through Kevon Looney, sending him to the floor, and puts in a one-handed slam with authority.

Bledsoe draws and-1 call on Curry
Eric Bledsoe drives past Stephen Curry and draws a foul before sinking a floater, sending Curry to the bench.